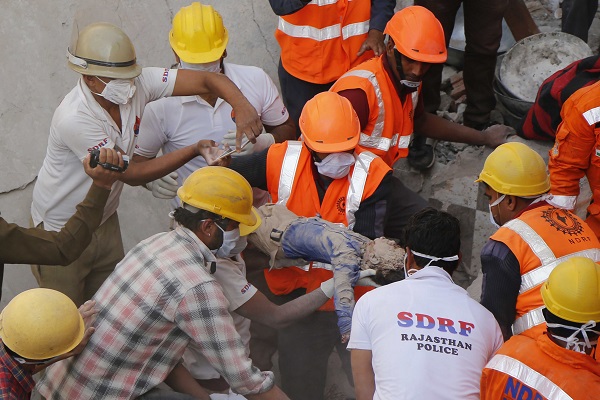 Citing a report of Gyan Prakash Tripathi, the District Magistrate of Mau, Additional Chief Secretary (Home) Awanish Awasthi said, “12 bodies are in mortuary. Six injured persons are in hospital. NDRF team from Varanasi is on way to the spot.” (Photo: AFP/Getty Images).

AT least 12 people died and six others were injured when a cylinder exploded in a two-storey house in Walidpur area here on Monday, officials said.

The house collapsed following the explosion. Some nearby houses were also damaged in the incident. Food was being cooked in the house when the explosion took place.

Citing a report of Gyan Prakash Tripathi, the District Magistrate of Mau, Additional Chief Secretary (Home) Awanish Awasthi said, “12 bodies are in mortuary. Six injured persons are in hospital. NDRF team from Varanasi is on way to the spot.”

UP Chief Minister Yogi Adityanath expressed condolences to the family of the deceased and directed the DM and SP to immediately provide all possible relief and help to the injured persons, he said.

Superintendent of Police Anurag Arya said debris is being removed from the spot of the blast. JCB and gas cutters have been pressed into action to remove the debris.

“The adjoining area has been vacated so that no further loss of life takes place. A couple of houses in the neighbourhood were also damaged and developed cracks due to the blast. Rescue work is going on,” he said.

Speaking to reporters outside the district hospital, UP Cabinet minister for Backward Class Welfare and Divyangjan Empowerment Anil Rajbhar said, “It is a sad incident. A house has been completely damaged. The state government is with the aggrieved family. Every possible medical help will be given to the injured persons.”