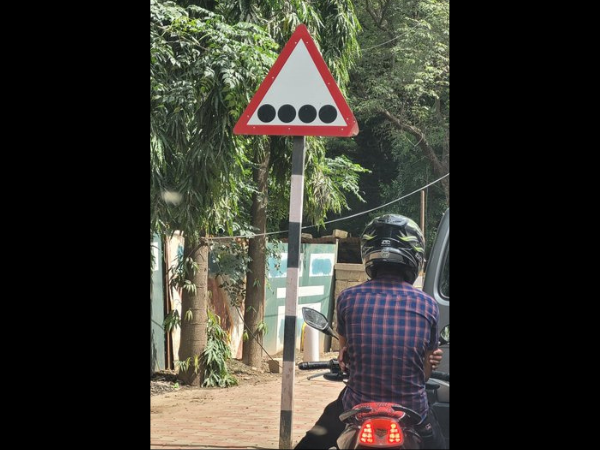 Road safety awareness is something that is not given utmost care in India. Authorities often take measures to educate people about traffic signs and safety measures but not always there are serious takers.

Recently, one such instance of lack of awareness over traffic signs came to the fore from the southern city of Bengaluru, also called India’s Silicon Valley for its information technology hub and the local traffic police took all care to raise awareness about the same.

A commuter in Bengaluru shared on social media an unusual road sign which he spotted in the city and tagged the traffic police to ask about it.

Aniruddha Mukherjee, a digital worker, posted a picture of the sign showing a few black dots to ask the traffic police, “What traffic symbol is this? @wftrps @blrcitytraffic. This is put up just before Hopefarm signal!”

To this, the traffic police in the Whitefield area where Mukherjee spotted the sign responded fast explaining why such a sign was put up in that part of the city.

They said the sign meant a blind person is likely to cross the road and hence advised motorists to exercise caution while passing that area.

“Dear Sir, That is a Cautionary sign board which tells about a possible blind person likely on the road. Exercise caution while driving. There is a blind school at hopefarm junction where this board is placed. Regards,” the Whitefield traffic police said.

Dear Sir,
That is a Cautionary sign board which tells about a possible blind person likely on the road. Exercise caution while driving.
There is a blind school at hopefarm junction where this board is placed.
Regards

The episode received reactions from other social media users to lauded the move, thanking the police for educating the public about the same.

However, there were also others who felt the authorities should have made some publicity to educate people about such unique signs.

But there were also people who grabbed the opportunity to mock Bengaluru’s potholed roads, saying the signboard suggested that there were potholes ahead.

Here are some funny ones:

And I thought it was a sign of potholes ahead.

Potholes are there plz be careful

This means too many potholes ahead, and it should be placed all over Bangalore. 😀🤪