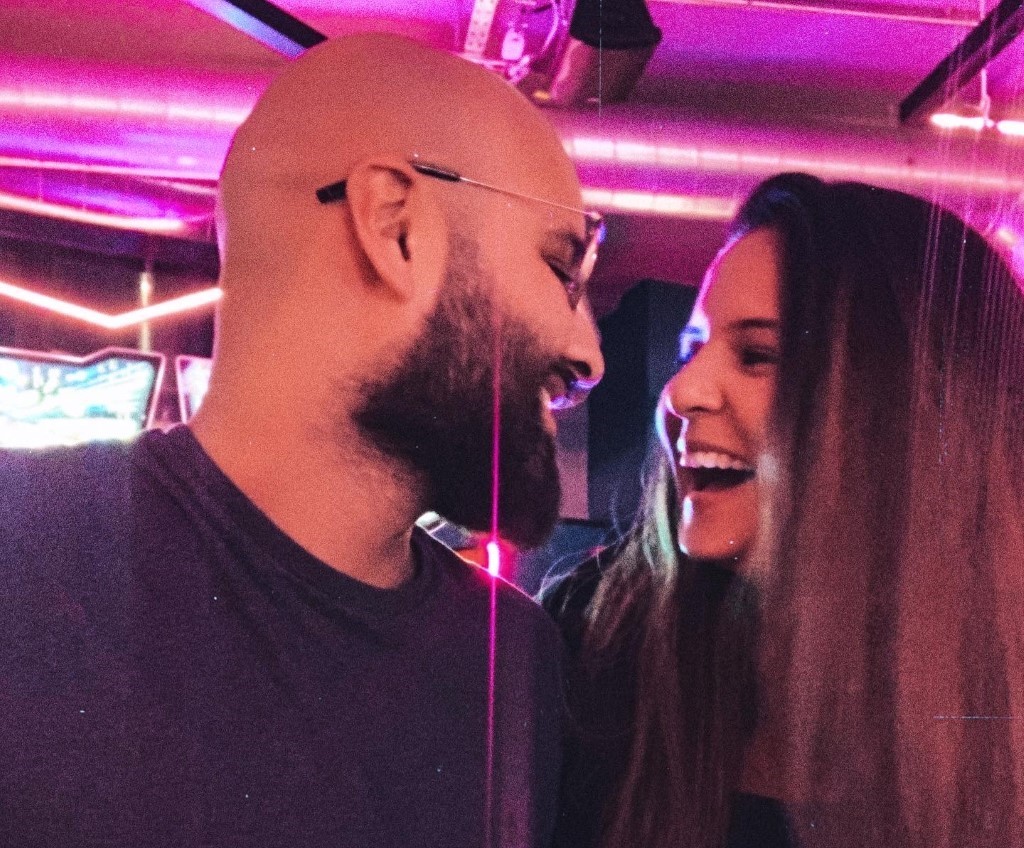 True love can be found in the most unlikely places and with someone you least expect.

For Dipti Sharma and Dipen Sharma, there were many coincidences that connected them, and having the same surname along with living in Leicester are just a few. She had moved to Mumbai in 2016 for work and he was a cancer survivor, pursuing a professional wheelchair basketball career in Europe. They knew of one another and were vaguely in touch via social media, but that didn’t stop them from having a magical and inspiring romance.

Dipti detailed their beautiful story for Eastern Eye, from that first connection to falling deeply in love and getting engaged. Also, why it didn’t matter that the wonderful man she fell in love with was a leg amputee and how their inspiring romance is raising awareness.

In 2019, I was in the UK visiting home. While leaving a café with my mother, a guy I didn’t recognise shouted ‘hello’ from his car at the traffic lights. I loudly replied, “Sorry, do I know you?” As he drove away, my mother asked me who it was, and I jokingly said: “Maybe my future husband. Who knows?” Later that evening Dipen mockingly messaged me on my Instagram with ‘sorry, do I know you?’ and I realised it was him in that car earlier. We promised to have a catch-up, but that didn’t happen. When 2020 rolled around, I started wondering if I would meet ‘the one’.

Then one slow Sunday, Dipen replied to an Instagram story I had posted and somehow that event led to us speaking the entire day via DM. One conversation led to another. We began speaking daily and it felt like the beginning of something special. We both had the same mindset of getting to know one another without any rules of pace and that made it so much easier. We spoke about his cancer journey and leg amputation, but most importantly, about what felt crucial to us as individuals in a relationship.

The amputation was never a deal breaker for me. It was long distance, but there was a realisation we were into each other.

Covid’s crazy global restrictions meant I had no scope of returning to Mumbai. Dipen’s basketball season had finished abroad, and he returned to surprise me in UK, turning up outside my house with my favourite donuts. There I was, opening the door at 8.30am with no makeup, greasy hair in a bun and my PJs – not how I imagined our first meeting would be. However, there was a warm comfort, and I could feel the­re was no one else I wanted that moment to be with.

I had always loved my surname as it’s my identity since birth and would hate to change it after marriage. Dipen happened to have the sa­me surname, along with many other coincid­ences on several occasions, and I knew the universe was communicating that he was ‘the one’.

When I was ready to tell my parents, one of the happiest news felt like the hardest. I remember wondering about all the choices and fears my parents may question me about, such as if we may be ‘able’ to have kids, would we live a ‘normal’ life, would he be ‘able’ to look after me, what would ‘society’ say, etc. But I took the plunge and told them this was something I’d thought over and Dipen was someone I’d need to break boundaries and stereotypes to prove the world wrong. I had seen Dipen’s abilities, so what others thought didn’t matter – not the trolls, judgements, or any questions.

When I shared the news with my parents he had cancer and was now a leg amputee my father gently responded, ‘so what? These things can happen before marriage, or after. In your case, it’s happened before marriage. It doesn’t change anything.’ My mother was equally supportive. That’s when I knew I could carry on moving forward in the world with Dipen, without any fear of society and, most importantly, raise awareness with my head held high.

I also realised I needed to stop introducing my loved ones to Dipen with the ‘he is an amputee’, card. We don’t do it with people with health issues, or other physical flaws, so why was it ne­e­ding to be justified I had to ask myself. I eventually owned it like it wasn’t a topic to raise unless it was being questioned.

It’s not something I really notice, but to the world it’s still new. I see a man who is ambitious, caring, kind, family oriented, athletic, an amazing cook, loving and extremely handsome. But the first thing people notice is Dipen’s prosthetic leg. I always smile, knowing they’re wondering what happened and what his story is. They always ask politely, and he always answers insightfully.

Dipen started calling himself an amputee after successfully kicking cancer in 2007. His leg was amputated due to osteosarcoma, a rare form of bone cancer most common in adolescents and younger adults.

Life before cancer was running around as usual; and life after cancer was walking around with a prosthetic leg. Of course, there were many other hurdles in between; diagnosis days, treatments, hospital stays, the struggle of losing faith in himself and believing he could never recover. It was tough for him to adapt to his new life as an amputee. But he brilliantly did. He reached the light at the end of the tunnel, and it made him into the amazing man that he is today, including becoming a professional wheelchair basketball player. His dream and goals never stopped, and neither has his persistence in living life to the max.

We now want the world to know that everyone’s story matters, and happiness still exists if we believe it enough. We finally proved that he didn’t need to find someone ‘like him’ and I think it’s important to show that there is no limit in love and equality, and maybe the change begins with individuals like us.

Dipen popped the big question to me on 12.01.2021 – a palindrome date that was very special to me. We will tie the knot in Mumbai in early 2023, with our loved ones. My Mumbai story was left unfinished, but it’s also the reason I got to meet Dipen. Some things have a happy ending and some stories are still yet to finish, but with God’s grace, I get to do both.

More than 1 in 4 children in England are dieting, shockingly many of…