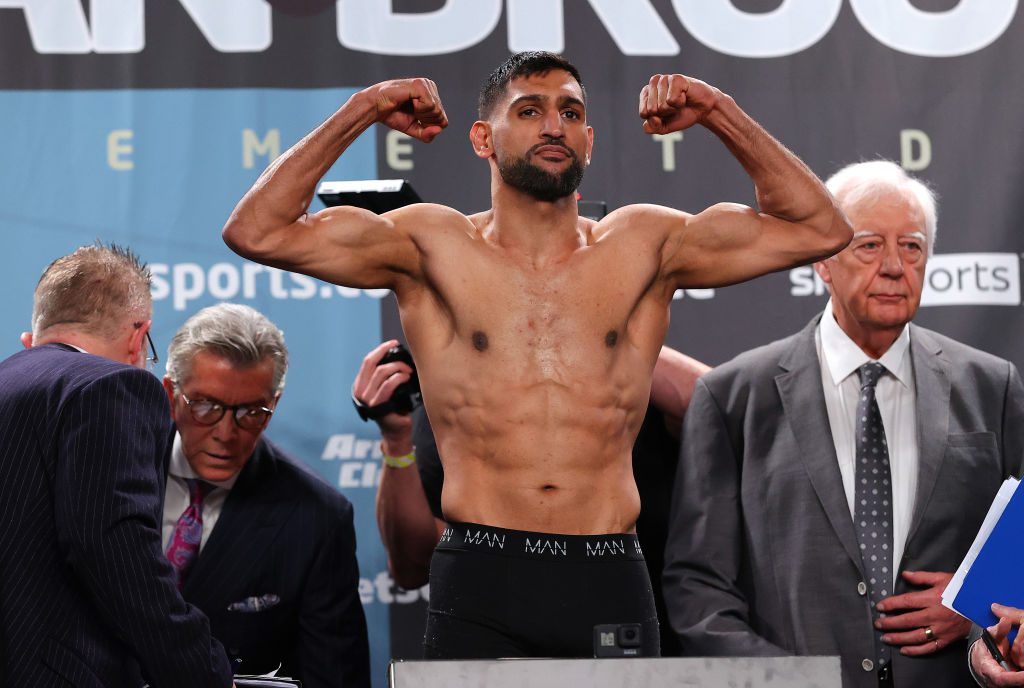 FORMER boxing world champion Amir Khan announced his retirement on Friday (13) from the sport after a 17-year professional career.

Khan, 35, is the former WBA and IBF light-welterweight champion and won silver at the 2004 Athens Olympics.

He was beaten by fellow Briton Kell Brook in a sixth-round stoppage in Manchester in February this year. Brook announced his own retirement last week.

“It’s time to hang up my gloves. I feel blessed to have had such an amazing career that has spanned over 27 years,” said Khan, ending with a 40-fight record of 34 wins and six defeats.

He said on Twitter: “It’s time to hang up my gloves. I feel blessed to have had such an amazing career that has spanned over 27 years. I want to say a heartfelt thanks and to the incredible teams I have worked with and to my family, friends and fans for the love and support they have shown me.”

The Bolton fighter had launched his pro career in 2005 after winning an Olympic silver medal at the 2004 Athens Games.

Khan’s wife posted a tribute to her husband on Instagram following news of his retirement on Friday, while expressing her relief that they can now live ‘stress-free’.

Faryal wrote alongside a picture of him celebrating in the ring: “King *crown emoji* Always an exciting fight. Finally we can live stress-free.”

“Happy retirement King Khan. A legend in the sport and an inspiration to us all,” she said.

Last month, Khan revealed that he was robbed at gunpoint in London. The boxing champion said he and his wife Faryal were safe after the incident, in which he had a watch stolen after being confronted by two men with a gun.

Khan burst onto the scene as a 17-year-old at the 2004 Olympics. He was the only boxing representative for Team GB at the Games.

A silver medal in Athens generated additional funding for Team GB and paved the way for future Olympic stars such as Anthony Joshua and Nicola Adams, the BBC reported.

It also thrust Khan into the limelight and his transition into professional boxing came amid huge fanfare.

He raced to 18 straight wins as a professional, with his lightning-fast hands despatching most opponents in exciting fashion.

After a surprise knockout loss to Breidis Prescott in 2008, Khan moved to the US and teamed up with trainer Freddie Roach.

Khan became a world champion in July 2009, defeating Andriy Kotelnik on points to secure the WBA super-lightweight title, and he then stopped Zab Judah to add the IBF belt two years later.

A hotly disputed points loss to Lamont Peterson ended Khan’s world title reign, and he was halted by Danny Garcia while attempting to win the WBC and WBA belts in his next fight.

Later, Khan made an audacious move up to middleweight to challenge Canelo for the WBC belt, suffering a sixth-round knockout loss in May 2016 and was stopped by Crawford in the sixth round of their WBO title fight in April 2019.

Khan’s rivalry with Sheffield’s Brook was one of the biggest rivalries in British boxing history. The 17-year-feud was finally settled in February.

He hinted at retirement after the defeat, saying his love of the sport was “not there anymore”.

In the weeks that followed, Khan had suggested he might not be ready to hang up the gloves on a defeat but has now opted to follow his rival into retirement.

Brook says he wants to focus on managing fighters, an area Khan has also previously said he would like to pursue. He has also worked closely with the WBC in promoting boxing in the Middle East.

Outside the ring, he has maintained a strong public profile through his appearances in the reality gameshow ‘I’m a Celebrity’ and his own BBC reality TV show ‘Meet the Khans: Big in Bolton‘.

Khan was born and raised in Bolton, to a Punjabi Rajput family, which has roots in Punjab, Pakistan. He was educated at Smithills School in Bolton, and Bolton Community College.

He began to box competitively at 11, with early honours including three English school titles, three junior ABA titles, and gold at the 2003 Junior Olympics.

In early 2004 he won a gold medal at the European Student Championships in Lithuania, and in South Korea several months later he won a world junior lightweight title after fighting five times in seven days. One of his notable early amateur fights was against Victor Ortíz, whom he defeated in a second-round stoppage. Overall, he compiled an amateur record of 101–9.