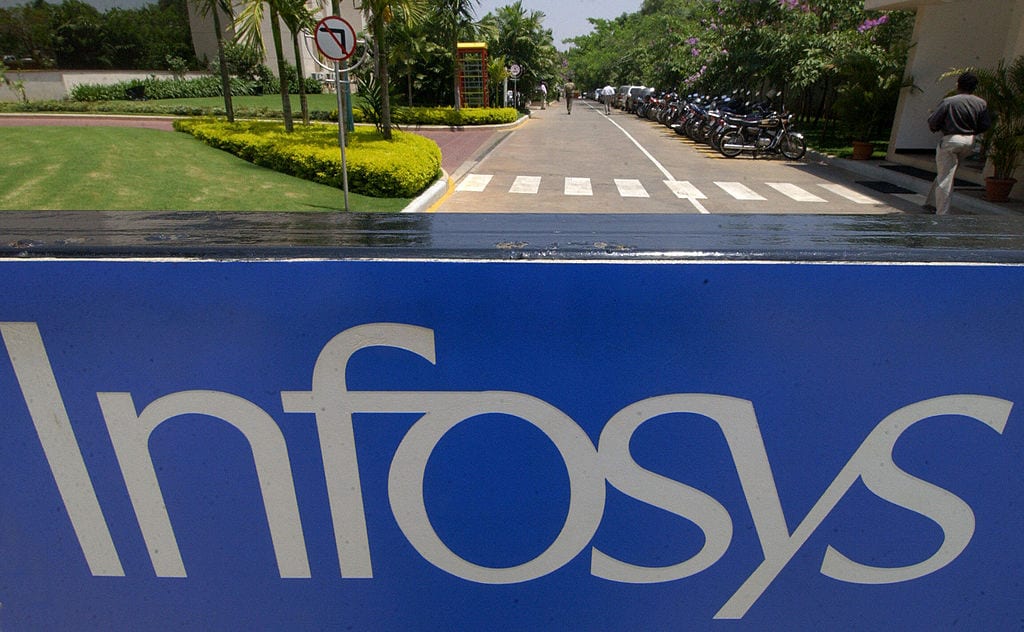 Infosys Technologies Ltd headquarters in Bangalore in the South Indian state of Karnataka. (Photo by INDRANIL MUKHERJEE/AFP via Getty Images)

HERE are some news in brief related to Indian economy and business for Monday, August 1, 2022:

IT services major Infosys on Monday announced the opening of its Sydney Living Lab, a high-tech co-creation space for digital innovation, part of a network of over 20 established globally, including Melbourne, the Press Trust of India reported. The announcement was made during the Premier of New South Wales (NSW), Dominic Perrottet’s visit to Infosys headquarters in Bengaluru. “The Premier toured the expansive 81-acre Infosys Bengaluru Campus, and immersed in digital experiences in the Infosys Bengaluru Living Lab”, Infosys said in a statement.

The fifth generation (5G) telecom services are likely to be launched in India by October this year as the government on Monday successfully completed the spectrum auction, mopping up over Rs 1.50 lakh crore (£15.4 billion/$18.99 billion) in bids by four companies, including Reliance Jio, Bharti Airtel, Vodafone Idea and Adani Data Networks. Addressing a media briefing after the end of the bidding for 5G spectrum, Indian communications, electronics and information technology minister Ashwini Vaishnaw said out of the total 72,098 MHz of spectrum on offer, 51,236 MHz or around 71 per cent has been sold in the auction. Total 40 rounds of bidding were conducted in the past seven days. The total value of the bid stands at Rs 1,50,173 crore (£15.48 billion/$19 billion).

Reliance Jio Infocomm Limited, India’s largest digital services provider, said on Monday it has acquired spectrum in 700MHz, 800MHz, 1800MHz, 3300MHz and 26GHz bands in the 5G auctions conducted by the Indian government’s department of telecommunications. The acquisition of the right to use this spectrum will enable Jio to build the world’s most advanced 5G network and further strengthen India’s global leadership in wireless broadband connectivity, Reliance Jio said in a statement, Asian News International reported.

Highlighting India’s robust economic health despite the Covid-19 pandemic and current geo-political situation, Indian finance minister Nirmala Sitharaman on Monday said there was no question of India getting into stagflation or recession like some major economies of the world. In her reply to the debate on price rise at the Lok Sabha of the Lower House of the Indian parliament, Sitharaman said, “We have never seen a pandemic of this kind. All of us were trying to make sure that people in our constituencies are given extra help. I recognise that everybody — MPs and state governments have played their role. Otherwise, India would not be where it is compared to the rest of the world.”

India exported defence-related exports worth around Rs 1,387 crore (£143 million/$175.6 billion) during the first quarter of the financial year 2022-23 (April-June), government data showed. This exports-related information was given by the country’s minister of state for defence Ajay Bhatt in a written reply in the Rajya Sabha or Upper House of the Indian Parliament on Monday. “However, names of countries cannot be divulged due to strategic reasons,” the minister said. The value of defence exports during the financial year 2021-22 was at Rs 12,815 crore (£1.32 billion/$1.62 billion).

India’s manufacturing sector activity gained momentum in July to hit an eight-month high driven by marked gains in growth of new business and output, a monthly survey showed, ANI reported. Rising from 53.9 in June to 56.4 in July, the seasonally adjusted S&P Global India Manufacturing Purchasing Managers’ Index (PMI) highlighted the strongest improvement in the health of the manufacturing sector. The indices vary between 0 and 100, with a reading above 50 indicating an overall increase compared to the previous month, and below 50 an overall decrease.

India’s mobility solutions company Comviva on Monday announced its strategic partnership with Vietnamobile, one of the leading telecom operators in Vietnam to power AI-led intelligent customer engagement, ANI reported. As a part of the engagement, Comviva shall help Vietnamobile deliver personalised, contextual communications in real-time and at scale with MobiLytix Real-Time Marketing . Speaking on the occasion, Raymond Ho, chief executive officer, Vietnamobile said, “We have been investing significantly in digital for the past few years to build an integrated customer experience. Our partnership with Comviva shall help us add deep level of personalization and enable us to take full control of engagement across the entire customer lifecycle.”