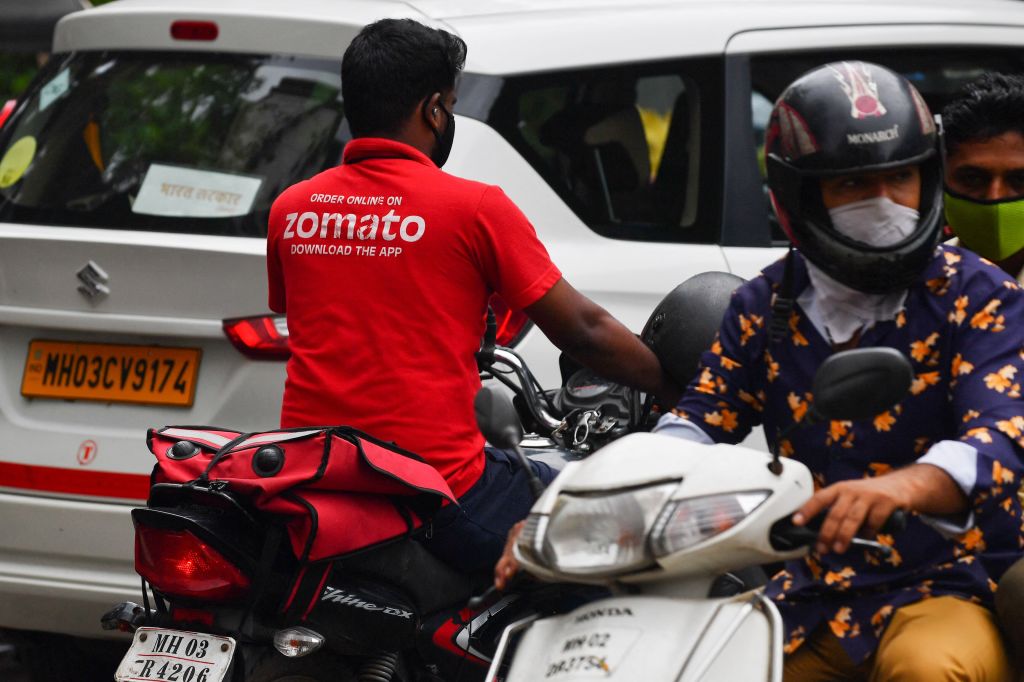 A Zomato deliveryman in Mumbai, India. (Photo by INDRANIL MUKHERJEE/AFP via Getty Images)

Uber Technologies on Wednesday sold its entire 7.78 per cent stake in Zomato in a bulk deal on the Bombay Stock Exchange in which Fidelity and ICICI Prudential Life Insurance — bought stakes in the new-age stock. Uber sold 61.22 crore (612.2 million) shares of Zomato that it had earned two years ago by selling Uber Eats in an all-stock deal, on Wednesday at a price of Rs 50.44 (£0.53/$0.64) per share.

India, which is in its 75th year of Independence, is now home to as many as 75,000 startups, the country’s commerce and industry minister Piyush Goyal said on Wednesday. In a tweet, he said, “These numbers tell the power of a vision. A vision to see innovation & enterprise drive growth. India is now home to 75,000 startups in the 75th year of Independence and this is only the beginning,” Goyal said in the tweet. The minister had recently said the country aspires to become the largest startup ecosystem in the world.

The rupee slumped 68 paise to close at 79.21 (provisional) against the US dollar on Wednesday, as disappointing macroeconomic data weighed on investor sentiment. At the interbank foreign exchange market, the local currency opened lower at 78.70 and fell further to settle at the day’s low of 79.21.

India’s Directorate of Revenue Intelligence (DRI) has found customs duty evasion of around Rs 2,217 crore (£230.8 million/$280.3 million) by Chinese firm Vivo Mobile India, according to an official statement released on Wednesday. Vivo India, which is a subsidiary company of Guangdong — China-based Vivo Communication Technology — is engaged in manufacturing, assembling, wholesale trading and distribution of mobile handsets and accessories thereof. During the investigation, DRI officials conducted searches at the factory premises of Vivo India, which led to the recovery of incriminating evidence suggesting willful misdeclaration in the description of certain items that Vivo India imported, for use in the manufacture of mobile phones, according to a statement released by India’s finance ministry.

Misahna Multinational Corporation on Wednesday announced the launch of its operations in India, ANI/NewsVoir reported. Misahna is a streetwear-based fashion house which offers premium fusion and promises to raise the bar for comfort in opulence by joining the top streetwear players. Announcing their entry into the Indian market, the brand showcased their designs and their bespoke collection at a fashion show where models walked the ramp displaying the various outfits which was choreographed by the experienced Sam Churchill.