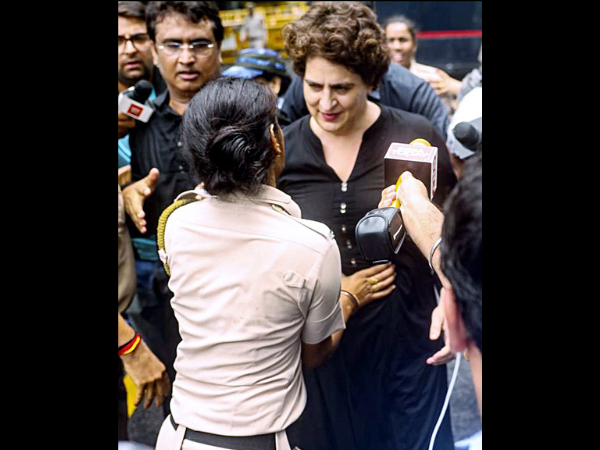 Indian home minister Amit Shah on Friday hit out at the Congress, saying the party chose August 5 for protest and its leaders wore black clothes because they “want to give a subtle message to further promote their appeasement politics” on a day prime minister Narendra Modi laid the foundation of a grand Ram temple at Ayodhya two years ago. He also referred to Enforcement Directorate’s probe in the National Herald case and said the agency “neither summoned nor inquired nor conducted a raid” on Friday and the Congress had held a protest.

Police personnel were seen detaining Indian National Congress leader Priyanka Gandhi Vadra, daughter of the party’s interim president Sonia Gandhi, along with other leaders of the party who were protesting against the Narendra Modi government over a range of issues, related to price rise, Goods and Services Tax on essential items and unemployment on Friday. The 50-year-old Vadra, who is the general secretary of the All India Congress Committee, staged a ‘dharna’ (sit-in protest) on the streets, defying the police officers around her. Dressed in black like other leaders of the opposition party, including brother and former party president Rahul Gandhi, she was also seen climbing over police barricades to reach the spot where she protested. However, police officers later dragged her away citing denial of permission over law-and-order situation.

With the Indian National Congress, one of India’s main opposition parties, ramping up attack against the Narendra Modi government over inflation and Goods and Services Tax (GST) among other issues, its former president Rahul Gandhi launched a scathing attack on the country’s finance minister Nirmala Sitharaman on Friday (5), calling her a “mouthpiece”. In a press conference at the party’s headquarters in New Delhi that was allegedly barricaded by the local police earlier this week, Gandhi said he did not think Sitharaman has “any understanding of what is happening in the country”.

West Bengal chief minister Mamata Banerjee, who met prime minister Narendra Modi in New Delhi on Friday, has asked for funds for various central welfare schemes being implemented in her state. In a letter to PM Modi, Banerjee said, “I request for urgent release of funds due to state for implementation of schemes including MGNREGA, PM Awas Yojna and PM Gramin Sadak Yojna. Dues from the central government on these schemes amount to about Rs 17,996 crore (£1.87 billion). Substantial amount on account of many developments and welfare schemes, estimated to be around Rs 1,00,968.44 crore (£10.5 billion) is also due. With such a large amount remaining outstanding, the state is facing extreme difficulty to run affairs and take care of people of the state,” she added.

The Appointment Committee of the Cabinet (ACC) headed by prime minister Narendra Modi has approved a one-year extension for Union cabinet secretary Rajiv Gauba, Asian News International reported. Gauba’s term was set to get completed at the end of this month. However, he will continue in the same position till August 30, 2023. Last year in 2021 also, Gauba was given a one-year extension till August 2022 by the government. On August 30, 2019, Gauba had taken over as the new Cabinet Secretary in the Government of India after the superannuation of PK Sinha. Gauba is an IAS officer of the Jharkhand cadre (1982 batch) and has held important assignments like Union Home Secretary, Secretary, Ministry of Urban Development and Chief Secretary, Jharkhand. He has also represented India at the International Monetary Fund.

The Supreme Court of India on Friday adjourned for August 16 the hearing of a plea alleging a rising number of attacks on Christian institutions and priests across the country, ANI reported. A bench headed by Justice DY Chandrachud said it will take up the matter for hearing on August 16 after Solicitor General Tushar Mehta sought an adjournment to place a preliminary affidavit to assist the Court. The petition was filed by the Archbishop Of Bangalore Diocese Dr Peter Machado.