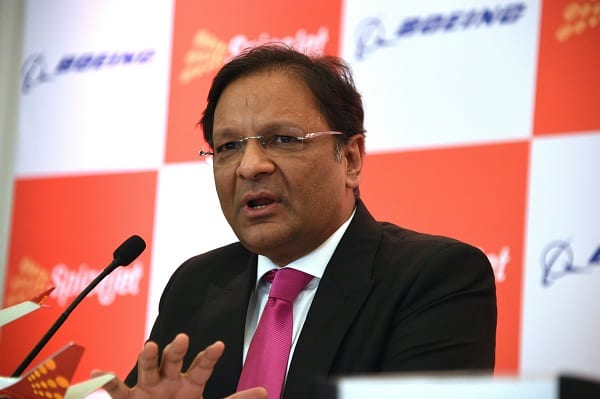 Ajay Singh, Chairman and Managing Director, SpiceJet, in an interview rued that the civil aviation sector in India is highly taxed and identified it as one of the major stumbling blocks in making it globally competitive (Photo: DOMINIQUE FAGET/AFP/Getty Images).

AS India has emerged as the one of the fastest growing civil aviation markets of the world, it is time that the government take steps to make the aviation sector globally competitive beginning with reduction on its tax structure, the head of a low-cost airline has said.

Ajay Singh, Chairman and Managing Director, SpiceJet, in an interview rued that the civil aviation sector in India is highly taxed and identified it as one of the major stumbling blocks in making it globally competitive.

“I think lowering of taxes and looking at aviation in a holistic sense as a job creator, as something that connects India to itself and to the world. It’s important that we take a more holistic approach to aviation,” he said

Singh was in Washington DC last week as part of a business delegation that accompanied Indian Finance Minister Nirmala Sitharaman who was here to attend the annual meeting of the International Monetary Fund and the World Bank.

India, Singh said, is the only country which taxes aviation fuel at an average of about 35 per cent while no other significant aviation country in the world taxes fuel at all.

As such Indian carriers are paying a much higher cost of operation and, therefore, they are not competitive with others. That is one big issue, he said.

MROs (Maintenance, Repair, Overhaul) is one space where India can be doing exceedingly well, Singh said.

“We can be repairing our own aircraft. We have the engineering skills. We have the people in India to do this. We have the infrastructure to do it. We have the skills. And despite that a lot of repair and overall active activity actually happens overseas because of the high tax in India,” he said.

“So you have to moderate taxes. India can be a huge global base for repair and overall not only for the airlines within India, but for for airlines outside India. So that’s a space that we certainly need to look at,” Singh said.

He asserted that it is also important that India should build its own international hubs like Dubai, Abu Dhabi, Doha, Singapore and Bangkok and stop exporting traffic into these hubs and allowing them to distribute traffic around the word.

“It’s important for a large country like India to have people go directly from Delhi, Bombay, Bangalore and Hyderabad to Europe and the US and the far east. So, we need to ensure that a policy action is taken on that front,” Singh said.

He said India has to start looking at the aviation sector in a holistic sense and try and make sure that the system does not make it burdensome to operate the businesses.

“We have to ensure that aviation, the airlines themselves succeed,” he said.

Of the BRICS countries, Singh said India remains the only one where there is no major assembly facility of either Boeing or Airbus.

That’s a space that the government definitely needs to work on, he said.

Observing that India is a very large market, he said there is need to encourage people to come and start build something within India.

“I think the on engine repair for example, again, we need to ensure that a larger engine makers like CFM or Pratt and or Rolls Royce, start by setting up at least the maintenance and repair facilities within India,” Singh said.

In the aviation sector, a lot is possible and a lot can be done especially if it is small planes, helicopters, aircraft components, and others, he said.

“But I think we have to work as one team India. The corporate sector as well as the government have to work aggressively with foreign companies that own the technology to encourage them to build in India,” Singh said.