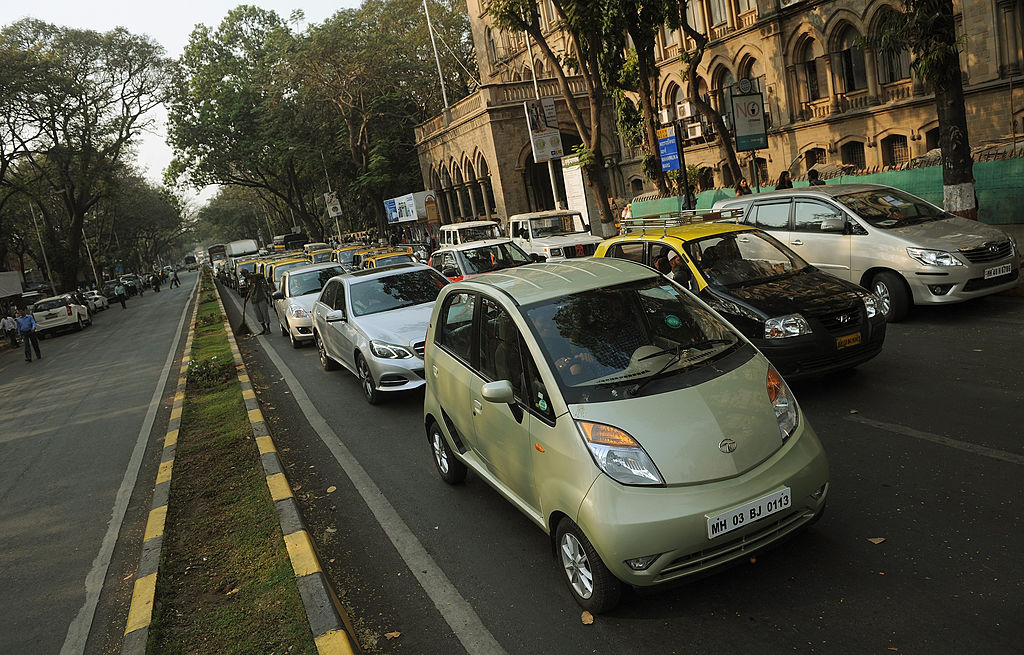 An Indian resident drives a Tata Nano car (C) on the road in Mumbai on January 31, 2014. The Tata Nano, billed as the world’s cheapest car, and a host of other top-selling small models from India have failed their first independent crash tests, a global safety group said. AFP PHOTO/PUNIT PARANJPE (Photo credit should read PUNIT PARANJPE/AFP via Getty Images)

INDIA will introduce a safety rating system for passenger cars – a measure it hopes will encourage manufacturers to provide advanced safety features and will boost the “export worthiness” of vehicles produced in the country.

The country’s road transport ministry said in a statement it will assign a rating of one to five stars for cars, based on tests assessing adult and child occupant protection as well as safety assist technologies.

Here is what Nitin Gadkari, India’s minister of road transport & highways, said in a series of tweets about the new system on passenger cars’ safety:

I have now approved the Draft GSR Notification to introduce Bharat NCAP (New Car Assessment Program), wherein automobiles in India shall be accorded Star Ratings based upon their performance in Crash Tests. @PMOIndia

Bharat-NCAP will serve as a consumer-centric platform allowing customers to opt for safer cars based upon their star-ratings, while promoting a healthy competition among OEMs in India to manufacture safer vehicles.

Star Rating of Indian Cars based on Crash Tests is extremely crucial not only to ensure structural and passenger safety in cars, but to also increase the export-worthiness of Indian automobiles.

The testing protocol of Bharat NCAP shall be aligned with Global Crash Test Protocols factoring in the existing Indian regulations, allowing OEMs to get their vehicles tested at India’s own in-house testing facilities.

Bharat NCAP will prove to be a critical instrument in making our automobile industry Aatmanirbhar with the mission of making India the Number 1 automobile hub in the world.

The new system is slated to come into effect in April 2023.

India, which has some of the world’s deadliest roads, has also proposed mandating that all passenger cars have six air bags, despite resistance from some carmakers which say it will increase the cost of vehicles. Current rules call for two airbags – one for the driver and one for the front passenger.

India is the world’s fifth-largest car market, with annual sales of around 3 million units a year. Maruti Suzuki, majority owned by Japan’s Suzuki Motor, and Hyundai Motor are the biggest-selling automakers.