India Would Not Balk At Using Force To Defend Itself: Rajnath Singh 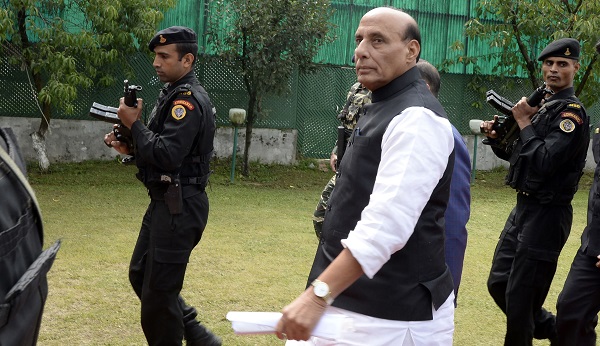 “India has never been an aggressor in its history nor will it ever be. But that does not mean that India would balk at using its strength to defend itself,” Singh said, in presence of South Korea’s top military brass (Photo: TAUSEEF MUSTAFA/AFP/Getty Images).

INDIA has never been an aggressor but that does not mean it would balk at using its strength to defend itself, Defence Minister Rajnath Singh said on Thursday (5).

His comments at a defence dialogue in Seoul came in the backdrop of spiralling tension between India and Pakistan over the Kashmir issue.

“India has never been an aggressor in its history nor will it ever be. But that does not mean that India would balk at using its strength to defend itself,” Singh said, in presence of South Korea’s top military brass.

The defence minister arrived in Seoul on Wednesday on a three-day visit. He posted a series of tweets from his handle.

“Defence diplomacy is a key pillar of India’s strategic toolkit. In fact, defence diplomacy and maintaining strong defence forces are two sides of the same coin. They go hand in hand,” he said.

In his address, attended by top military brass of South Korea and top executives of that country’s defence firms, Singh also spoke about the need for common rules-based order in the resource-rich Indo-Pacific region.

He said the “order” must be based on sovereignty and territorial integrity and equality of all nations, irrespective of size and strength, adding India is for an open and inclusive architecture for the region.

In November 2017, India, the US, Australia and Japan gave shape to the long-pending “Quad” Coalition to develop a new strategy to keep the critical sea routes in the Indo-Pacific free of any influence.

“Our quest for common prosperity and security requires us to evolve a common rules-based order for our region, the Indo-Pacific region,” he said.

“We must provide to all nations the right of equal access to the use of common spaces on sea and in the air,” he said.

Singh said India is for an open and inclusive architecture for the Indo-Pacific region, with ASEAN centrality and equal access to the global commons.

“If we work together on the basis of the five principles that have characterised Indian thought and policies for centuries- the principles of Samman (respect), Samvad (dialogue), Sahayog (cooperation), Shanti (peace), and Samriddhi (prosperity), our success is assured,” he said.

Talking about India’s ‘neighbourhood first policy’, he said New Delhi is engaged with its neighbours in sub-regional groupings of IORA (Indian-Ocean Rim Association) and BIMSTEC apart from a trilateral maritime cooperation format with Sri Lanka and Maldives.
The IORA is a grouping of countries around the Indian Ocean while Bay BIMSTEC (Bay of Bengal Initiative for Multi-Sectoral Technical and Economic Cooperation) is a bloc of seven nations of South Asia and South East Asia.

“Our people are linked through family ties that can be traced to the legendary Queen Heo Hwang-ok, who travelled all the way from Ayodhya to marry King Suro of Gaya in present-day Gimhae. These linkages form a strong underpinning for our contemporary ties,” he said.