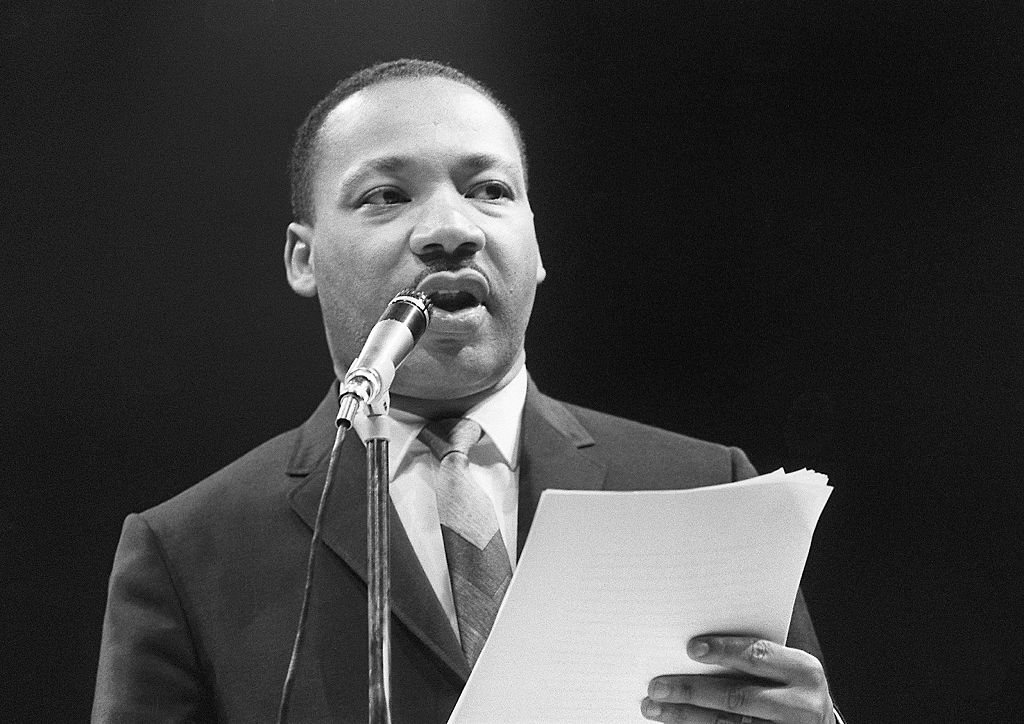 US clergyman and civil rights leader Martin Luther King addresses, 29 March 1966 in Paris’ Sport Palace the militants of the “Movement for the Peace”. (Photo by /AFP via Getty Images)

The Indian-American community, including US vice president Kamala Harris, celebrated the legacy of civil rights leader Martin Luther King Jr, asserting that the country must continue to fight for the freedom to vote and freedom for all.

King, a champion of civil rights for Blacks, was born on January 15, 1929, in Atlanta, Georgia.

As we celebrate and reflect on the legacy of Rev. Dr. Martin Luther King, Jr., let us all recommit to building a better, fairer, more equitable world. pic.twitter.com/HdTjFsaFCM

“Dr Martin Luther King, Jr pushed for racial justice, economic justice, and the freedom that unlocks all others: the freedom to vote,” Harris said.

“To truly honour the legacy of the man we celebrate today, we must continue to fight for the freedom to vote and for freedom for all,” she added.

"I refuse to accept the view that mankind is so tragically bound to the starless midnight of racism and war."

“As we celebrate and reflect on the legacy of Rev Dr Martin Luther King, Jr, let us all recommit to building a better, fairer, more equitable world,” Harris said.

There is a long way to go when it comes to achieving the dream of Martin Luther King Jr, said Indian American Congressman Raja Krishnamoorthi.

Despite the strides made towards equality since the civil rights movement, the country “still has far to go in ridding itself of the bigotries that have haunted us for so long,” he said.

“Americans of all backgrounds must come together and reject hatred in all its forms while standing shoulder to shoulder to expand the circle of inclusion,” Krishnamoorthi said.

The horrific attack on January 11 on a young woman motivated by anti-Asian hate in Indiana is a disturbing reminder of the pervasive dangers of such bigotries and the need to counter them, he said.

As the Covid-19 pandemic fades, its impacts, including the surge in anti-Asian hate crimes we’ve seen since 2020, continue despite expanded community and law enforcement programmes established to fight it, he noted.

“Today we honour Martin Luther King Jr, one of the greatest champions of justice and human rights in our nation’s history. As we reflect on his legacy, let’s recommit to creating a more equal and just America for generations to come,” Congressman Ro Khanna said.

Congresswoman Pramila Jayapal said Dr King was a once-in-a-generation leader and in the toughest of times, he “called on us to dream and organise.”

As a lifelong activist and organiser, he has been a central inspiration to me, she said. “To honour him and his work, we recommit ourselves to the struggle for justice and equality for all,” she added.

“Thanks to Dr King’s moral leadership, Congress passed the Voting Rights Act of 1965. That act has been undermined by an extremist Supreme Court. It’s time to eliminate the filibuster and take on MAGA attempts to destroy our right to vote. Pass the John Lewis Voting Rights Act,” Jayapal said.

Republican politician Nikki Haley the words of Martin Luther King are a timeless reminder that “we must face our country’s challenges together — each of us doing our small part.”

“Together, let’s move forward honouring the progress we’ve made in our country, and commit — for our children — to continue working for a brighter, better future,” said Haley, a former US Ambassador to the United Nations.

India’s Ambassador to the US Taranjit Singh Sandhu travelled to King’s hometown of Atlanta in Georgia along with several members of the Indian American community to pay respects to him at the King Center. Sandhu described him as the visionary leader of the American civil rights movement and an advocate of non-violence.

Martin Luther King Jr championed nonviolent resistance in the struggle for civil rights; won a Nobel Peace Prize. He led a march from Selma to Montgomery to demand Black voting rights and drew over a quarter-million people to the National Mall in 1963 when he delivered his “I Have a Dream” speech.

Also, youths of Hindu Swayamsevak Sangh (HSS), USA on Monday received the ‘2023 Service Above Self MLK Youth Leadership Award’ in recognition of their voluntary services.

Presented by Aurora City Mayor Richard Irvin, the award was given to youth groups and youth leaders for their Community Service and efforts in promoting ‘Diversity-Equity-Inclusion’ (DEI).

HSS youth received this award for their food drives, highway cleanup, cultural education and, honouring of school teachers & first responders, and other service activities in 2022, a media release said. Meanwhile, HSS volunteers at Roseville & Rocklin, California, celebrated MLK day with the local community and community leaders. They also helped the event organisers in the setup and cleanup, the media release said.

HSS member J R Sandadi was invited by the Indiana Christian Leadership Conference (ICLC) to represent the Hindu community for the 54th MLK Day celebration service at St. John’s Missionary Baptist Church, Indianapolis. Sandi, expressing his gratitude for Martin Luther King Jr., spoke on this occasion and offered a Hindu prayer of peace and unity for all.

Sharing his experience, Sandadi quoted MLK, “Faith is taking the first step even when you don’t see the whole staircase.” He further said, “MLK’s inspiration is not limited to a day, but is experienced all the time while serving the society.”