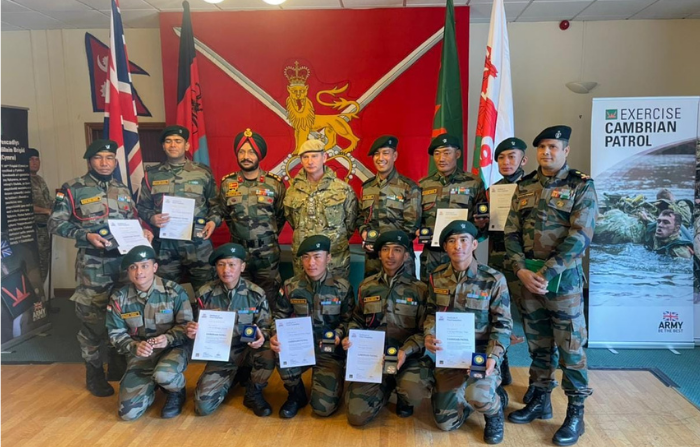 Members of the Indian Army team that won the gold medal at the prestigious Cambrian Patrol Exercise in London, UK. (Photo: Indian High Commission in UK)

THE 4/5 Gorkha Rifles (Frontier Force) of the Indian Army made the country proud by winning the gold medal at the prestigious Cambrian Patrol Exercise at Brecon, Wales, the UK, which was held between October 13 and 15.

The team from the Indian Army received a rich applause from the judges for its show. Indian High Commissioner to the UK, Gayatri Issar Kumar, felicitated the Indian Army Cambrian Patrol Team at India House in London.

The event is considered the ultimate test of human endurance, team spirit and is rightly called the Olympics of Military Patrolling.

The challenge was not easy for the Indian Army team as it had to compete against 96 teams that included 17 international outfits representing special forces and regiments from around the world.

The members of the Indian Army team performed under harsh terrain conditions and inclement weather. These presented various challenges in addition to the complex real-world situations that were simulated to assess their reactions in a combat setting.

The Indian Army team was complimented on its navigation skills, delivery of patrol orders and overall endurance for completing the patrol. The captain of the team said that his team followed the basics that the Indian Army maintains in its battle drills and procedures.

The award ceremony saw the presence of General Sir Mark Carleton-Smith, the chief of general staff of the British Army, who presented the gold medal to the entire Indian Army team. Brigadier Vikramjit Singh Gill, military advisor at the Indian High Commission in London also attended the event.

This year, out of 96 participating teams, only three international patrols were awarded a gold medal till phase six of the exercise.