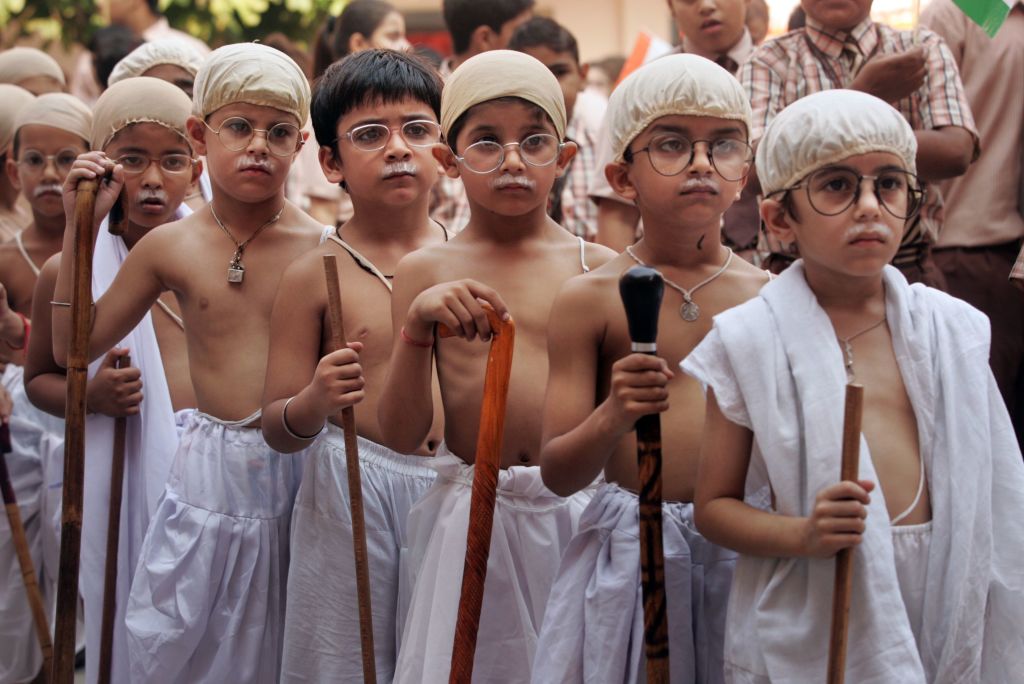 Indian School children dressed as Mahatma Gandhi look on as they participate in a peace march in Amritsar on October 1, 2008. Across India preparations are underway to mark the national public holiday of Gandhi Jayanthi which celebrates the birth anniversary of Mahatma Gandhi. AFP PHOTO/Narinder NANU (Photo by NARINDER NANU / AFP) (Photo by NARINDER NANU/AFP via Getty Images)

An Indian state has launched a campaign to Indianise the greeting on the telephone.

The Maharashtra government passed a resolution that appealed to its employees to say ‘Vande Mataram’ instead of ‘hello’ while receiving official or personal phone calls.

However, the government clarified that it was not mandatory to use the Indian form of greeting but encouraged its officials to do so.

The resolution said ‘hello’ represented western culture without having any specific meaning and it “does not arouse any emotion”.

Vande Mataram – which literally means ‘salute to mother’ – would create a feeling of affection, it said and called for an awareness campaign to promote it.

“Our appeal is to avoid saying hello while receiving a call,” the state’s cultural affairs minister Sudhir Mungantiwar said over the weekend explaining the rationale behind the government campaign.

“The country is celebrating the 75th year of Independence and in accordance with its appropriateness, it was decided that the government employees will no longer use ‘hello’, but instead start their telephone conversation with Vande Mataram,” he said ahead of the birth anniversary of Mahatma Gandhi.

Vande Mataram, the first two words of Bankim Chandra Chatterjee’s poem of the same title, became a major slogan during India’s independence movement against the British.

“We have to bring Vande Mataram into our daily routine again,” Fadnavis said, adding it would be started as a “movement”.

Critics, however, said the move was an attempt by prime minister Narendra Modi’s Bharatiya Janata Party (BJP) and its local ally which are in power in the western Indian state, to promote nationalism.

The opposition Samajwadi Party criticised the government’s move. Its Maharashtra state unit president Abu Asim Azmi said Muslims were not in favour of saying ‘Vande Mataram’ as it was “against” their faith.”

Tata to merge Air India and Vistara: How will it be done & what it…