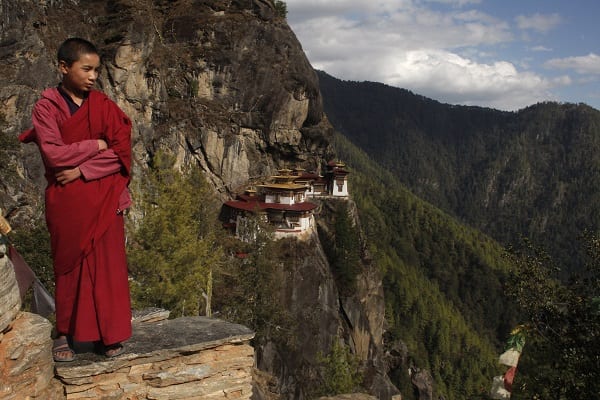 Abhijit Ratan Hajare, who is from Maharashtra, was part of a 15-bike convoy touring the Himalayan nation, The Bhutanese reported. The group was led by a Bhutanese national (Photo: Paula Bronstein/Getty Images).

AN Indian tourist has been detained by the Royal Bhutan Police for allegedly desecrating a ‘chorten’ in the Buddhist kingdom, according to a media report on Friday.

Abhijit Ratan Hajare, who is from Maharashtra, was part of a 15-bike convoy touring the Himalayan nation, The Bhutanese reported. The group was led by a Bhutanese national.

A ‘chorten’ is a Buddhist shrine, typically a saint’s tomb or a monument to the Buddha.
In photographs and videos published by The Bhutanese on Twitter, Hajare is seen standing on top of a ‘chorten’. A second man Jambay, who was repairing the ‘chortens’, is seen sitting on the ‘chorten’.

The ‘desecration’ incident happened when the bikers were resting at Dochula on Thursday and the team leader was trying to arrange parking space for the bikes, the report said.
The Bhutanese group leader was unaware of the incident, it said.

The police have taken Hajare’s passport and he was called in on Friday for questioning. The royal police have started an investigation.

Though Hajare was officially detained, he was allowed to spend Thursday night at his hotel.
The police is also on the look out for Jambay, the report said.