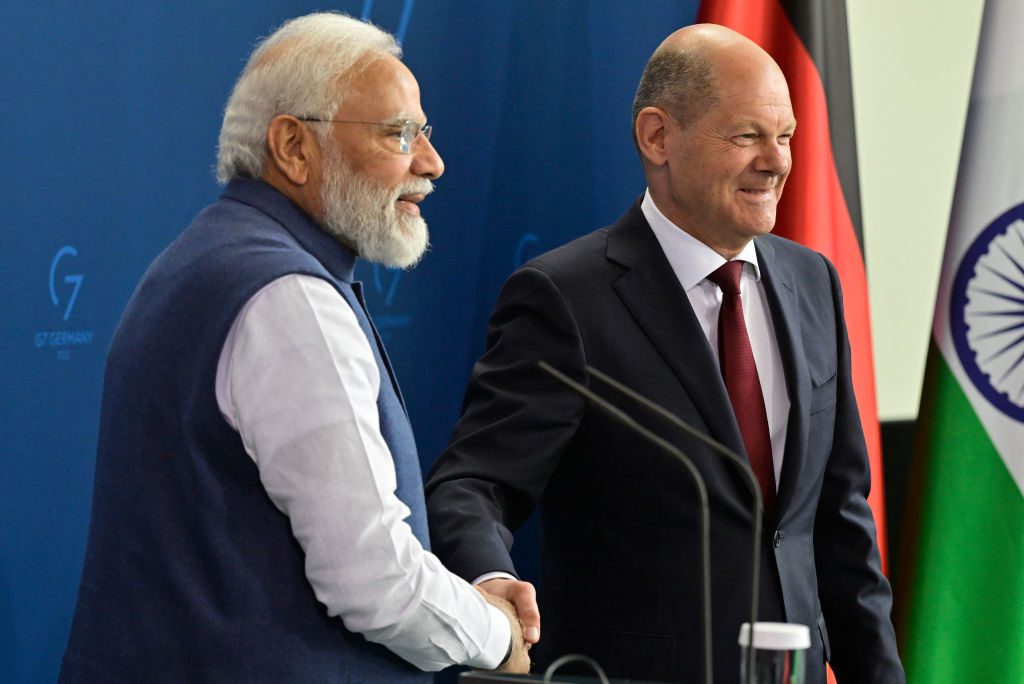 INDIAN prime minister Narendra Modi called for dialogue to end the war in Ukraine at the start of a European tour on Monday (2) but steered clear of condemning Russia over the invasion.

India, which imports much of its military hardware from Russia, has long walked a diplomatic tightrope between the West and Moscow, and has called only for an immediate end to hostilities.

“We have insisted on a ceasefire and called for talks as the only way to resolve the dispute since the start of the Ukraine crisis,” Modi told reporters after talks with German Chancellor Olaf Scholz in Berlin.

“We believe that there won’t be any winners in this war and everyone will lose, which is why we are in favour of peace,” he said.

Besides the humanitarian impact on Ukrainians, pressure on oil prices and global food supplies is also “putting a burden on every family in the world,” he said.

Scholz stressed that the war in Ukraine threatened the “rule-based global order”.

“Russia has jeopardised the fundamental principles of international law with its attack on Ukraine,” he said.

“The war and the brutal assault on civilians in Ukraine show the unchecked manner in which Russia is violating the principles of the UN Charter,” Scholz added, repeating his call for president Vladimir Putin to withdraw his troops.

Scholz said he and Modi agreed that the “inviolability of borders” and “sovereignty of nations” must not be called into question.

“We thoroughly discussed that we want to achieve a better future – not by fighting wars against each other but by making economic development possible together,” he said.

The two governments later signed a joint declaration expressing “strong support” for upcoming talks between the European Union and India on a free trade agreement.

Scholz also confirmed he had invited Modi as a special guest to a Group of Seven (G7) leaders’ summit next month, seen as part of an effort to forge a broader alliance against Russia.

Bloomberg News had reported Sunday (1) citing unnamed sources that Scholz was concerned over Modi’s refusal to condemn Russia and India’s increased fossil fuel imports from there, and was undecided on the invite until weeks ago.

India has significantly increased imports of Russian oil from March onwards, but has bristled at criticism of the move, saying Europe’s consumption of Russian energy commodities remains far higher.

Modi was holding talks in Berlin before heading to Copenhagen to join the prime ministers of Denmark, Iceland, Finland, Sweden and Norway at a two-day India-Nordic Summit from May 3.

He will then make a brief stopover in France to see president Emmanuel Macron to “share assessments on various regional and global issues and will take stock of ongoing bilateral cooperation”, an Indian government statement said.

In a media briefing on Sunday (1), Indian foreign secretary Vinay Kwatra said European countries “not only understand but also have deep appreciation” of India’s position on the conflict.

The principal focus of the visits and discussions is to strengthen bilateral partnership across a range of areas including trade, energy and sustainable development, Kwatra said.

With Russia reeling under Western sanctions, some 50 Indian food, ceramics and chemicals exporters will head to Moscow later this month after enquiries from Russian firms, the Times of India newspaper reported.

“Trade and financial sanctions imposed on Russia… have opened up numerous avenues for Indian businesses across various sectors,” the newspaper quoted Vivek Agarwal from lobby group the Trade Promotion Council of India, which is organising the trip, as saying.

“Indian companies too are excited to tap the huge potential available for Indian products in Russia,” he told the newspaper.

The daily quoted unnamed government officials as suggesting that shipments would only start once the war in Ukraine ends.