Navinder, who couldn’t even run to front door, is set to run in London marathon for her late father 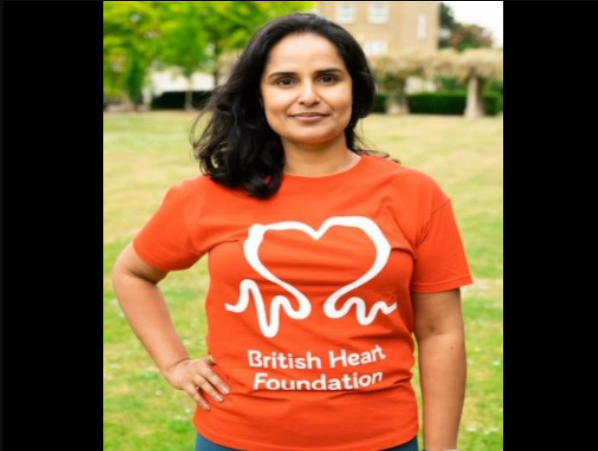 At one point of time, she could not even run to the front door but now, she is all geared up to run in a marathon, thanks to a special cause.

Navinder Molyneux, a mother of two from Surrey, is all set to take part in the TCS London Marathon on Sunday (2) in memory of her father Dershan Singh Sandhu who had died of heart failure a decade ago. The British Heart Foundation (BHF) is the official partner of the marathon and all the money raised will go towards pioneering regenerative medicine to help repair damaged hearts.

Navinder, who is participating as part of Team BHF, is more motivated to run the marathon this year since it marks the 10th anniversary of her father’s death. Dershan, who hailed from Malaysia, had two heart attacks and also suffered from Type 2 diabetes.

“I’m Malaysian of Indian heritage. I was born in Malaysia where my father came from. I know that South Asian people are prone to getting certain types of heart disease. I don’t know why, but I’m aware of it,” Navinder said.

“My dad had a couple of heart attacks that I knew of when he was young – in his late 30s and early 40s. It’s shocking really to me. I don’t know whether it was because he had a more sedentary lifestyle, lack of excise or poor nutrition – but I was shocked that it happened to him so young,” she added.

The untimely death of her father, who was haulage driver, has also taught Navinder to live a healthy life.

“I’ve been ensuring that I maintain a healthy lifestyle. I used to be around 18 stone but now I weigh around 11 stone at my highest. My lowest weight can be 9 or 10 stone. I’ve maintained that lower weight now for 13 years and I’m really proud of that,” she said.

For Navinder, it has been very hard to come to terms with the death of his father since she was very close to him. But she wanted to do something as her dad’s legacy to raise money for the BHF to facilitate heart research so that other families did not have not face what they did.

But Navinder was never a natural runner. But the tragedy taught her important lessons.

“I used to be one of those people who looked at other runners and wished I could do that when I couldn’t even run to the front door. After my dad’s heart attacks I knew I had to make a lifestyle change and that’s when I started to lose weight.

“I was a mum to two children and couldn’t really run around with them or play with them properly because of my weight and also I was very conscious of the diabetes history in my family. I knew that my days were going to be numbered if I didn’t make some changes. But there was no real regime or drastic diet I just started to eat a more balanced diet and smaller portions and to exercise more. I started to take the kids walking around the block and slowly I felt better and the weight was coming off,” she added.

But what made her particularly motivated to run a marathon.

She said that she took the decision since her father was athletic and fit in his younger days and played sports such as football besides running. Navinder also started preparing herself for the challenge by taking inspiration from her late father.

“I knew it would be a real challenge for me but I really wanted to rise to it. I started by doing a local 10k and trained for that and then set my mind to training for a marathon. I knew this would be the way I’d want to commemorate my dad’s life. I remember him running miles and miles when I was little and I remember sitting in the car waiting for him whilst he’d go running,” she said.

“Once I’d made up my mind to run the London Marathon, I applied to run for the British Heart Foundation and I got a place. When I opened the email to say I had got my place, it all suddenly became real…like that moment in Who Wants to be a Millionaire when the lights go down….

“The next day I went out and tried to run…. I did a Couch to 5 k. Running has been so good for my mental health, especially the discipline of getting myself out of the door in the winter when I didn’t want to run. It’s very liberating after a run to know you’ve done it …I get a real endorphin rush,” she added.

But the goal was still distant. After Navinder started running and training last year to do the London marathon, she was told that it was cancelled. As a special preparation, she had gone to the BHF headquarters in London in 2020 to get some knowledge about the event and met some other runners.

“So it was so disappointing,” she said.

But Navinder is happy that it is happening now and shared the news with her mother.

“When I told my mum (who lives in Malaysia) I was doing the London Marathon she just went “Oh that’s good”. I said to her “Do you actually know what a marathon is?” and she just replied “running”. I was trying to make her understand the enormity of running 26.2 miles so I actually got a google map of where she lives and mapped out 26.2 miles so she could see how huge it was,” she said.

She also said that when she told her friends in Malaysia about her running programe, they asked her “what for?”

Navinder said exercising is not a natural thing in that community and that’s why she got such a response.

“I was guilty of that attitude when I first came to the UK, too, and couldn’t understand the concept of just going out for a walk unless it was to go out to eat or for a coffee or a specific purpose,” she said.

She has undergone rigorous training for the mega occasion and now is all set to come out with flying colours.