Nobody should go through what I have gone through: Mumbai terror attack’s youngest survivor ‘Baby Moshe’ 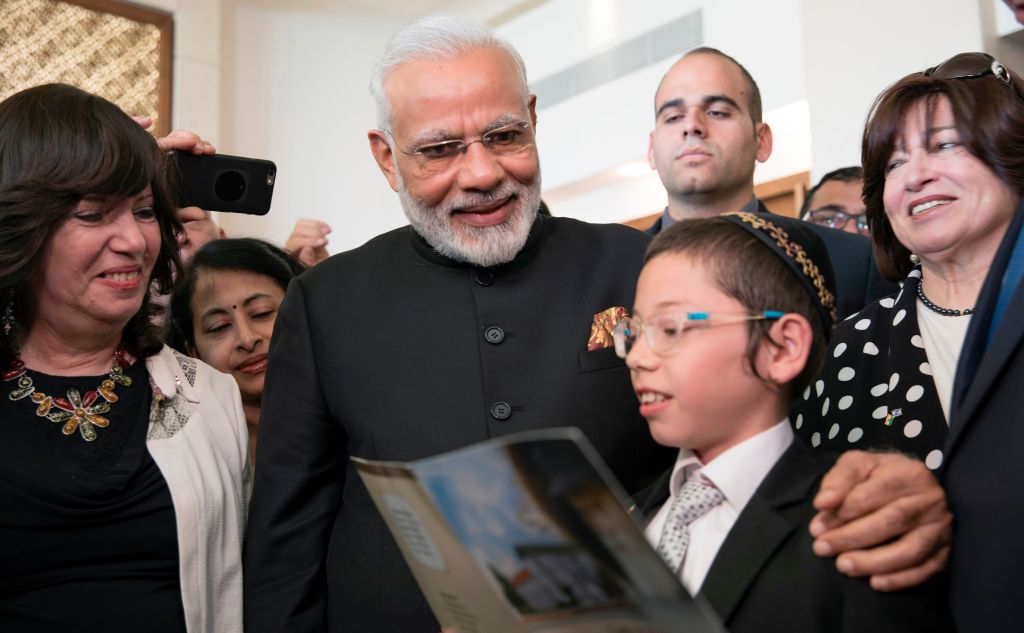 Indian Prime Minister Narendra Modi (C-L) places his hand on the shoulder of Moshe Holtzberg (C), son of slain US Rabbi Gavriel Holtzberg who was killed with his wife in the November 26, 2008 attacks on the Nariman Chabad house in Mumbai, during a meeting with the boy and other relatives at the King David Hotel in Jerusalem on July 5, 2017. The young Moshe was rescued in 2008 by his nanny following the attacks. A total of 166 people were killed and more than 300 others were injured when 10 heavily-armed Islamist militants stormed the city on November 26, 2008, attacking a number of sites, including the city’s main railway station, two luxury hotels, a popular tourist restaurant and a Jewish centre. Modi is on a historic three-day official visit to Israel as the first Indian prime minister ever to visit the country. / AFP PHOTO / POOL / ATEF SAFADI (Photo credit should read ATEF SAFADI/AFP via Getty Images)

Moshe Holtzberg, the Israeli child who was just two years old when he lost his parents in the 2008 Mumbai attack, has called upon the international community to look for ways to counter terror so that “nobody has to go through what he has gone through”.

‘Baby Moshe’, the youngest survivor of the Mumbai 26/11 attacks whose pictures with his Indian nanny Sandra holding him close to her chest in the besieged Nariman House – also known as Chabad House – caught worldwide attention, lost both his parents Rabbi Gabriel Holtzberg and Rivka Holztberg in the terror strike carried out by Pakistan-based Lashkar-e-Taiba (LeT) terrorists.

His parents were the emissaries of the Chabad Movement in Mumbai.

On Thursday, the family held prayers in memory of their dear ones at a cemetery in Jerusalem as per the Hebrew calendar.

In a recorded message shared by his family to PTI recently, Moshe, now 16, is heard narrating the story of his lucky escape in a daring act by his nanny, Sandra, “who risked her own life to save his”.

He also talked about growing up in Israel with his grandparents Rabbi Shimon and Yehudit Rosenberg, who have been raising him as their own son.

At the end, Moshe makes a solemn appeal that the international community should take steps so that “nobody should go through what I have gone through”.

Earlier this week, the Chabad Movement held its annual convention in New Jersey. It was attended by 6,500 of its emissaries and guests from all the 50 US states and over 100 countries and territories, a senior member of the Chabad Movement told PTI.

Moshe’s parents Gabi and Rivka are remembered at a gathering every year and the participants pray in their memory, he said.

Moshe was recently invited to the inaugural ceremony of the newly elected Knesset (Israeli parliament) following the November 1 general elections in the Jewish nation during which he read a chapter “for my brothers and friends” from the Book of Psalms (Tehillim).

The 26/11 attack continues to be an emotional moment for a lot of Israelis who feel that the Mumbai terror strike “is a shared pain” that binds India and Israel together.

The strikes were a series of 12 coordinated shooting and bombing attacks carried out by 10 LeT members. The attacks, which drew widespread global condemnation, began on November 26 and lasted until November 29, 2008. A total of 166 people, including several foreign nationals, died and more than 300 were wounded.

Nine Pakistani terrorists were killed by the Indian security forces. Ajmal Kasab was the only terrorist who was captured alive. He was hanged four years later on November 21, 2012.

Several events are planned across Israel on Friday and Saturday (after Shabbat) to pay respects to the victims of the attack in which six Jews were also killed.

Israeli leaders and officials have repeatedly called for the perpetrators of the horrendous crime to be “brought to justice”.

The Chabad Synagogue in the southern coastal city of Eilat put a plaque in the memory of the six Jewish victims of the attack – Gabriel holtzberg, Rivka Holtzberg, Ariye laiis, Ben Tziyon Hermon, Yochevet Orpaz and Norma Tzwatzblat Rabonovitz, praying that their souls rest in peace while commemorating the tenth anniversary of the attacks on 2018.