Offered president Zelenskiy a major new military training programme that could change the equation of this war: Boris Johnson 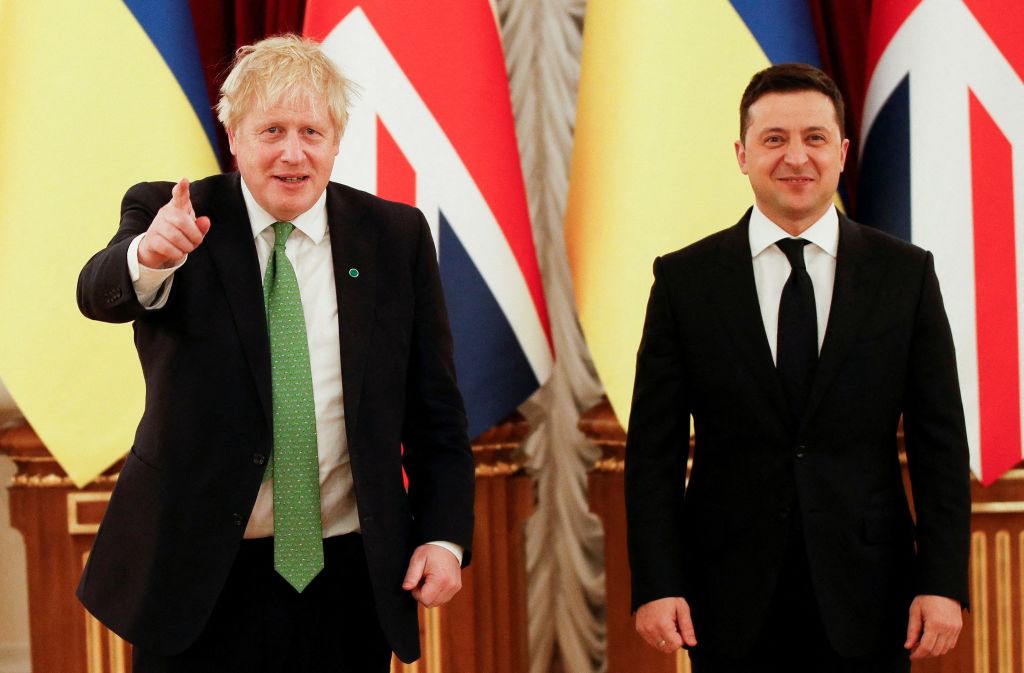 BRITISH prime minister Boris Johnson offered to launch a military training programme for Ukrainian forces on Friday (17) as he met president Volodymyr Zelenskiy in Kyiv on his second trip to the Ukrainian capital since Russia’s invasion.

Johnson, who survived a no confidence vote earlier this month, was greeted by Zelenskiy as a “great friend” and posted a picture of himself with the Ukrainian president, with the words “Mr President, Volodymyr, It is good to be in Kyiv again”.

Johnson offered to launch a major training operation for Ukrainian forces, with the potential to train up to 10,000 soldiers every 120 days at the meeting, his office said.

“My visit today, in the depths of this war, is to send a clear and simple message to the Ukrainian people: the UK is with you, and we will be with you until you ultimately prevail,” Johnson said.

“That is why I have offered President Zelenskiy a major new military training programme that could change the equation of this war – harnessing that most powerful of forces, the Ukrainian determination to win.”

The unannounced trip was Johnson’s latest show of support for Zelenskiy since Russia invaded Ukraine in February but might have come at the expense of his own lawmakers.

Some were angry after he cancelled an appearance at a conference in northern England, where some Conservatives won traditionally opposition Labour-supporting parliamentary seats for the first time in 2019.

The trip also came a day after the leaders of France, Germany, Italy and Romania travelled to Kyiv and endorsed Ukraine’s candidate status to join the European Union.

“Many days of this war have proved that Great Britain’s support for Ukraine is firm and resolute. Glad to see our country’s great friend Boris Johnson in Kyiv again,” Zelenskiy said.

He and Johnson discussed the state of play at the front line and the need to ramp up supplies of heavy weapons and to build up Ukrainian air defences, Zelenskiy said in a short statement delivered next to Johnson.

“We have a shared vision of how to move towards victory because that it is exactly what Ukraine needs – the victory of our state,” Zelenskiy said.

Johnson said in his statement: “We’re here once again to underline that we are here with you to give you the strategic endurance that you will need.”

He said that would include helping to intensify sanctions on Russia and to rally diplomatic support for Ukraine.

Johnson, who faces political pressure at home, has grown in popularity in Ukraine as Britain has poured in military and political support to Kyiv during the Russian invasion.

One cafe in Kyiv is selling an apple dessert named the Borys Dzhonsonyuk, a Ukrainianised version of the prime minister’s name.

Zelenskiy and Johnson laid wreathes at a memorial to slain Ukrainian soldiers and then were taken on a tour of destroyed Russian military hardware laid out in a central square, footage released by the Ukrainian president’s office showed.

Life in Kyiv has been gradually returning since Russia pulled out its forces from near the Ukrainian capital, but air raid sirens still sound regularly and a Russian missile strike hit the suburbs on June 5.

The new military training programme would train Ukrainian forces outside of the country, Johnson’s office said. Each soldier would spend three weeks learning battle skills for the front line, as well as basic medical training, cyber-security and counter explosive tactics, it said.