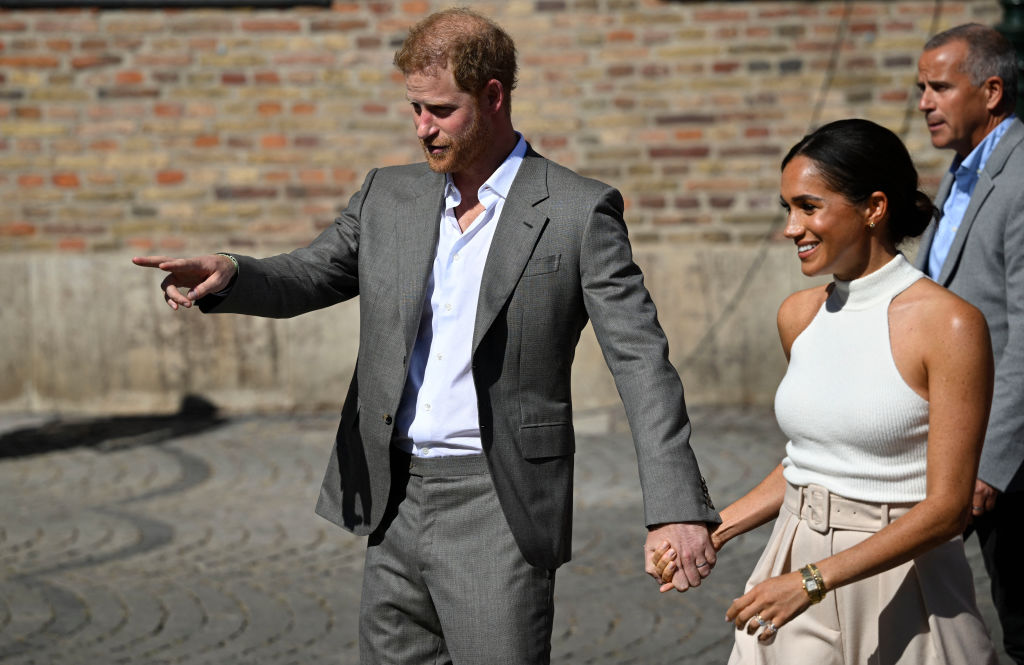 Meghan, Duchess of Sussex, and Prince Harry, Duke of Sussex, leave the city hall in Duesseldorf, western Germany, where they were received on September 6, 2022 in the context of the “One Year to Go” event of the Invictus Games Duesseldorf 2023. – The Duke of Sussex is the founder and patron of the Invictus Games Foundation. The 2023 edition of the Invictus Games, an international multi-sport event for wounded, injured and sick servicemen and women, both serving and veterans, will take place from September 9 to 16, 2023. (Photo by Sascha Schuermann / AFP) (Photo by SASCHA SCHUERMANN/AFP via Getty Images)

The images of the Duke and Duchess of Sussex Prince Harry and Meghan Markle were relegated all the way to the bottom of the Royal Family’s website over the last weekend.
Several media reports said that the Royal Family had “demoted” the couple.

The couple’s dedicated pages were put just underneath Prince William and Kate Middleton’s, who has now been promoted to Prince and Princess of Wales. According to Page Six, after Meghan and Harry announced stepping down as senior members of the Royal Family, they were pushed down below Princess Anne but now that King Charles III has ascended to the throne, they sit directly on top of Prince Andrew.

Their demotion is only the latest hiccup the couple has encountered in recent weeks, Page Six said. Following his grandmother’s death, the Duke of Sussex was forbidden from wearing his military uniform to the planned celebrations, unlike the rest of his family.

Page Six reported that after much deliberation, Charles agreed to let him do so for the actual funeral — with one condition: his late grandmother’s initials could not appear on his military outfit. Harry was reportedly so “heartbroken” that he almost refused to wear the uniform at all.

Furthermore, at the late monarch’s funeral, Markle and Harry were compelled to sit in the second row rather than in the front row with the rest of the royals.
There have been reports indicating there were differences between members of the royal family. Well, although one of the late Queen’s “dearest wishes” was for Harry to make amends with his family, it appears there is still some bitterness in the air.