Voters Turn Out In Large Numbers In India’s Rajasthan State 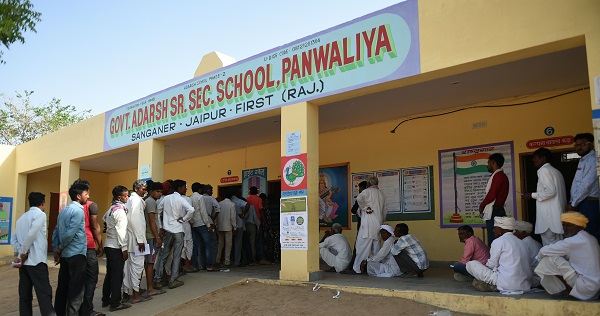 Indian voters wait in a queue to cast their vote at a polling station during India’s general election in village Panwaliya, in Sanganer on the outskirts of Jaipur on May 6, 2019 (Photo: MONEY SHARMA/AFP/Getty Images).

NEARLY 30 per cent turnout was recorded in the first four hours of polling on Monday (6) in 12 Lok Sabha seats of Rajasthan where two former Olympians are among the 124 candidates in the fray.

Sixteen of the total 134 candidates are women. 23,783 polling stations have been set up in 12 constituencies where 23 million voters are registered.

Two former Olympians, a former IAS officer and a former IPS officer are among the candidates whose fate will be decided by voters.

Jaipur rural, Bikaner, Dausa, Alwar are some of the keenly watched constituencies among the 12 seats.

Former Olympians Rajyavardhan Rathore, union minister of state, and Krishna Poonia are in a contest in Jaipur rural constituency.

While the sitting MP Rathore is banking on the Modi factor and highlighted national security as the key issue, Congress MLA Poonia questioned works done by Rathore.

The seat, which Rathore won with a margin of 3.32 lakh votes in 2014, is dominated by Jat community, a caste to which Poonia belongs.

Two ‘sants’, Sumedhanand Saraswati and Baba Balaknath, are trying their luck from Sikar and Alwar constituencies respectively. In Alwar, Congress candidate and former union minister and ex-royal Bhanwar Jitendra Singh are in the poll fight.

Rajasthan has a total of 25 Lok Sabha seats and 13 of them went to poll on April 29.