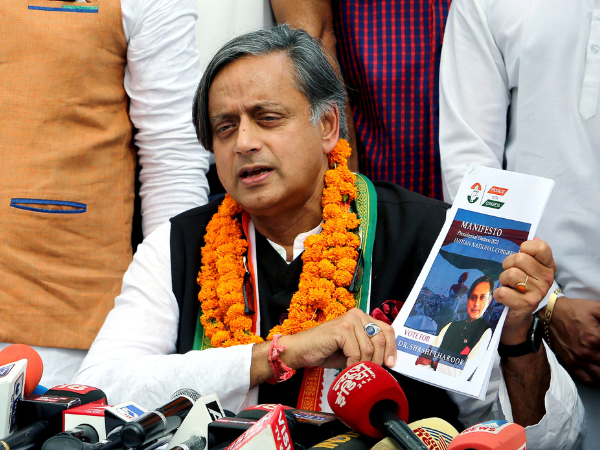 Indian National Congress leader Shashi Tharoor addresses the media after filing his nomination for the post of the party president, at his residence, in New Delhi on Friday, September 30, 2022. (ANI Photo)

Senior Indian National Congress parliamentarian Shashi Tharoor on Friday (23) apologised “unconditionally” over a blunder that was found in his manifesto for the election of the next president of the grand-old party — a map of India that did not include parts of Jammu and Kashmir, and Ladakh.

The 66-year-old three-time parliamentarian from Thiruvananthapuram in the southern state of Kerala later shared amended versions of the document after social media users, particularly supporters of the ruling Bharatiya Janata Party (BJP), attacked him and even accusing him of planning to “dismember” the country at a time when former Congress president Rahul Gandhi has embarked on a “Bharat Jodo Yatra” (United India March) in a bid to mobilise support.

Tharoor, who filed his nomination papers for the October 17 election for the Congress’s president, said in a tweet that “no one does such things on purpose”. He also posted links to the revised manifesto saying that his team “made a mistake”.

“We rectified it immediately and and I apologise unconditionally,” the senior leader, a former United Nations diplomat and junior minister in the former Manmohan Singh government, said.

Re the troll storm on a manifesto map: No one does such things on purpose. A small team of volunteers made a mistake. We rectified it immediately &I apologise unconditionally for the error. Here’s the manifesto:
English: https://t.co/aKPpji9Z8M
Hindi: https://t.co/7tnkY9kTiO

The Congress tried to deflect the BJP’s attacks on its ‘Bharat Jodo Yatra’. Senior leader and parliamentarian Jairam Ramesh said the BJP was using “any flimsy excuse” as ammunition against Rahul Gandhi’s march.

The BJP is clearly panicking now that the Bharat Jodo Yatra has entered Karnataka. The “I Troll Cell” (IT Cell) of the BJP will look for any flimsy excuse to target and tarnish the #BharatJodoYatra and @RahulGandhi. Only Dr. Tharoor and his team can explain this egregious error. pic.twitter.com/3GMYj19js3

India Today reported that even in the amended version, a mistake was spotted as in the second map, the Andaman & Nicobar, and Lakshadweep islands were found to be missing.

However, after the correction of the first draft of the manifesto that was released, a mistake was spotted in the amended manifesto too. On the second map, Andaman Nicobar and Lakshwadeep regions were missing from the structure of India.

It is the second time in three years that Tharoor has found himself in the middle of a map-related controversy. In December 2019, he had shared a publicity material about a protest held by his party in Kerala against the Citizenship Amendment Act (CAA), and that also had a similar problem.

In the latest controversy, Tharoor used a map in his manifesto booklet with the tagline ‘Think Tomorrow, Think Tharoor’ showing a network of dots representing the party’s units across the length and breadth of India. It was different from the official map of India which includes parts of Jammu and Kashmir and Ladakh that are occupied by Pakistan, and China, respectively.

The election for the next Congress president has three candidates in the fray, including Tharoor. The leader of the opposition in the Rajya Sabha, Mallikarjun Kharge, and a former minister in the eastern state of Jharkhand, KN Tripathi, were the others.

The result of the election will be announced on October 19.