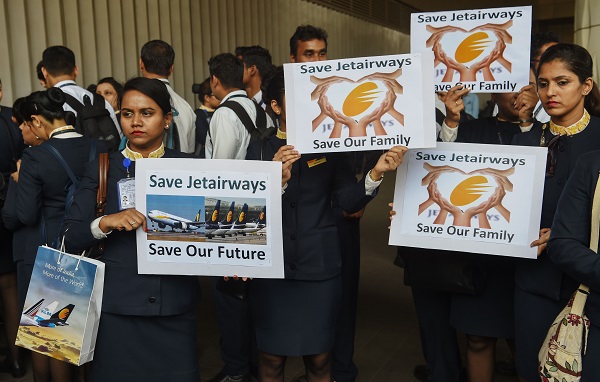 Jet Airways employees hold placards as they gather for a protest march at the Chattrapati Shivaji International airport, in Mumbai on April 12, 2019 (Photo: INDRANIL MUKHERJEE/AFP/Getty Images).

INDIA’S Jet Airways was teetering on the brink of collapse Wednesday (17), operating just five planes and waiting for lenders to release emergency funds to keep the debt-saddled carrier flying.

Airfares on rival carriers have soared and Air France and KLM are operating additional flights to Mumbai to accommodate passengers affected by Jet’s decision to cancel international flights.

As the airline seeks an immediate injection of Rs 4 billion to continue its few remaining services.

Here is a look at where it all went wrong for Jet.

Costly Purchase
Many aviation experts believe the start of Jet’s financial troubles can be traced back to the 2006 purchase of Air Sahara for $500 million in cash.

Founder Naresh Goyal reportedly ignored the advice of professional associates who said he was paying too much. Market reaction to the deal was also decidedly mixed.

The budget carrier was rebranded “JetLite” but it haemorrhaged money and in 2015, Jet wrote off its entire investment.

“The acquisition is still a millstone around the company’s neck,” Devesh Agarwal, editor of the Bangalore Aviation website said.

Budget Airlines
India’s aviation sector is fiercely competitive and Jet has taken a battering from a number of hugely successful low-cost airlines, including IndiGo, SpiceJet, and GoAir.

Experts said the people running Jet failed to take the trio seriously when they were founded between 2005 and 2006, offering cut-price fares and previously unserved routes.

“They were essentially assumed to be fringe players by the Jet management,” industry analyst Amrit Pandurangi said.

“Jet always catered to corporates and failed to recognise that low-cost carriers were attracting customers who were price sensitive,” he added.

Poor Management
Experts put a lot of the blame on Goyal’s management style.

They say his decision to have a single management team, headed by himself, running all Jet’s operations was a crucial mistake.

Analysts say he should have had one team running the full-service carrier and another running the budget flyer.

“Jet lacked a concrete business model and fiddled with it often, which confused investors, (and) passengers alike,” said Agarwal, who believes the company’s decisions lacked transparency.

Goyal has also been accused of making bad investments and failing to address the company’s deteriorating financial predicament while borrowing heavily.

Fluctuating Crude Oil
All of India’s carriers are particularly sensitive to fluctuations in global crude prices because the Asian giant is a major importer of oil.

When the rupee is weak, which it has often been over the past year or so, fuel the biggest cost burden for airlines becomes more expensive.

IndiGo and SpiceJet reported massive losses but analysts say their books were resilient enough to weather the quarterly losses. Jet’s, however, were saddled with debts.

“Jet Airways failed to manage its balance sheets and was caught out by these cyclical changes in the industry,” Mumbai-based economist Ashutosh Datar said.

Failure To Attract Investors
Aviation analysts say Goyal’s failure to find a strategic investor to pump money into Jet extended the airline’s losses, contributing to the financial predicament it finds itself in today.

Talks at the end of last year with tea-to-steel conglomerate Tata failed to go anywhere, while Etihad Airways reportedly refused to increase its stake because Goyal was at the helm.

The 69-year-old was forced to give up control of Jet last month as part of a debt resolution deal that saw a consortium of lenders led by the State Bank of India take over the airline.

It is now up to them to find a buyer. If they don’t then Jet is likely to become the first Indian airline to collapse since fugitive tycoon Vijay Mallya’s Kingfisher Airlines ceased operations in 2012.