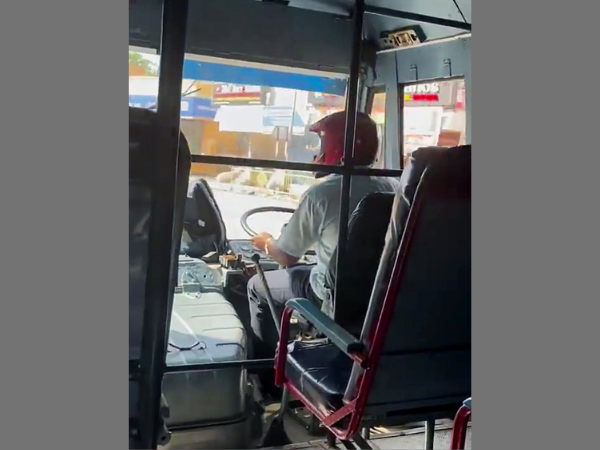 A driver of a government bus in Kerala drives the vehicle wearing a helmet as stones were pelted during the one-day state-wide strike called by Popular Front of India (PFI) over September 22, 2022, the National Investigation Agency raids, in Kochi on Friday, September 23. (ANI Photo/ANI Pic Service)

A day after leaders of the Popular Front of India (PFI) were arrested in a massive country-wide raid in India, the outfit called a dawn-to-dusk strike on Friday (23) in the southern state of Kerala and disturbances were witnessed across the state. A number of protesters were also detained.

Incidents of protesters pelting stones at vehicles and buses were reported from various parts of the state. A couple of police officers were also attacked, Asian News International reported.

In Mattannur, Kannur, a petrol bomb was hurled at the office of Rashtriya Swayamsevak Sangh, a right-wing Hindu nationalist organisation which is also the ideological mentor of India’s ruling Bharatiya Janata Party.

The PFI, which is accused of promoting radical Islam, called a state-wide shutdown to protest the arrest of its members from various corners of India by the National Investigation Agency on Thursday (22). The strike started at 6 am local time and was set to continue till 6 pm.

Many roads in the state were seen deserted on Friday morning. The incident of attack on the cops was reported from Pallimukku in Kollam district of the state. The injured police officers, who were attacked by two bike-borne miscreants after they tried to stop them, were identified as Antony and Nikhil and were undergoing treatment in hospital. The police said the registration number of the vehicle had been noted down and soon the culprits would be taken into custody.

Videos also surfaced showing the protesters pelting stones at a Kerala’s state transport bus at Panamaram village in Wayanad district. Incidents of attacks on buses were also reported from places such as Kozhikode, Kochi, Alappuzha, and Kollam.

In Thiruvananthapuram, the state capital, an autorickshaw and a car were vandalised.

Kochi, Kerala | Police detain five PFI workers for allegedly vandalising shops and vehicles during a protest as a part of the statewide strike called over NIA raids pic.twitter.com/X0LDhDaA6h

Releasing a statement, the PFI state committee said that it considered the NIA’s arrest of PFI national and state leaders “unjust” and “part of atrocities by the state”.

“A hartal (strike) will be held in the state on September 23, Friday, against the RSS-controlled fascist government’s move to use central agencies to silence dissenting voices,” it said.

#PFI turn violent in Kerala Indian Muslims are Attacks on buses that drive vehicles in violation of the bant.

The PFI also called upon the “democratic believers” to make successful the strike against the “fascist regime that crushes the civil rights”.

According to the police, stone-pelting incidents are being reported at various places in the state.

On Thursday, the PFI, while condemning the raids by the NIA and the Enforcement Directorate (ED) against its leaders, stated that it will “never surrender” and alleged that the agency’s claims are aimed at “creating an atmosphere of terror”.

A total of 106 Popular Front of India (PFI) cadres were arrested on Thursday in a joint operation conducted by the NIA, Enforcement Directorate and state police forces across 15 states in the country, according to sources.