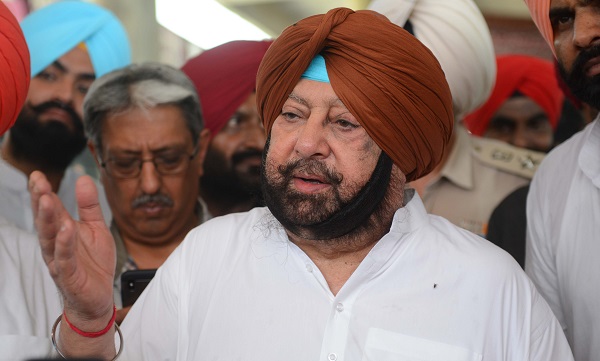 INDIA’S Punjab state chief minister Amarinder Singh Thursday (2) accused prime minister Narendra Modi of seeking votes in the name of martyrs and urged people to oust the “communally divisive” BJP from power and install a Congress government at the Centre.

Saying that his blood “boils” when he hears Modi “shamelessly” asking for votes in the name of Pulwama martyrs or the Balakot air strike, Singh asserted that the PM’s behaviour was “repulsive”.

“It is the fauj (soldiers) of India and its people who are getting killed everyday in the line of duty; it is not Modi’s fauj. He is using their sacrifice for political gains,” alleged the chief minister.

The prime minister in Maharashtra’s Latur last month urged first-time voters to dedicate their vote to the heroes of Balakot air strike and the 40 CRPF personnel killed in Pulwama terrorist attack.

There had been complaints to the Election Commission over the election speech, but the EC on Wednesday (1) said Modi did not violate the provisions of the model code of conduct.

On Thursday (2), the Punjab chief minister asked voters to throw out the “communally divisive” BJP and Akali Dal to usher an era of peace and prosperity under a Congress government.

“Anyone who wants to divide people on communal lines has no place in our civilised nation,” he said at an election meeting here.

Singh alleged the media, which Modi “controls”, was also speaking in the voice of the PM.

“But people can see which way the wind is blowing, the wind will sweep Modi and his BJP away,” he said, expressing confidence that people will vote Congress to power in this election.

Lashing out at the Akali Dal, an ally of the BJP in Punjab, over the desecration of holy scriptures in 2015 and the Behbal Kalan and Bargari incidents of police firing during anti-sacrilege protests during the Akali rule, Singh said their attempts to scuttle an SIT probe into the incidents will not succeed.

He said the Special Investigation Team officer, who he said was transferred by the Badals, will be brought back to head the probe the day polling ends.

He claimed not a single major case of sacrilege was reported since his government came to power in March 2017.

“…They will not succeed in their mission to create tension to divide people and garner support of the Sikh community through such actions,” he said.

Pointing to the significance of Kartarpur in the context of the 550th ‘Parkash Purb’ celebrations of Guru Nanak Dev, Singh hoped the Kartarpur Corridor between India and Pakistan will be ready in time to enable all devotees to pay their respects at the historic gurdwara across the border.

Taking a dig at Modi for “failing” to take the Sultanpur Lodhi development scheme forward, he said the Union home minister had held meetings but had only invited the Badals to discuss the plans.

The CM also blamed the Modi government for “aggravating” the problems of industry and farmers with its “wrong” policies.