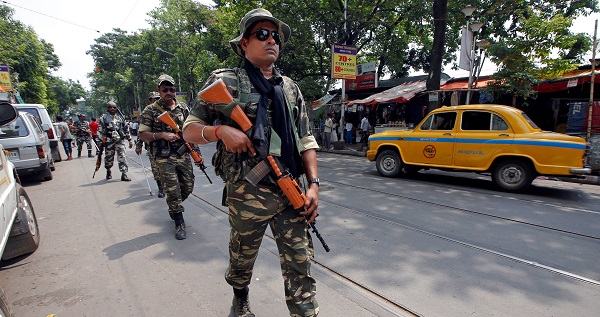 Central Reserve Police Force (CRPF) personnel conduct route march in a street ahead of the seventh and last phase of general election, in Kolkata, India, May 15, 2019 (Photo: REUTERS/Rupak De Chowdhuri).

SOLDIERS patrolled the centre of Kolkata, the capital of India’s West Bengal state, on Wednesday (15) a day after rival political supporters clashed during campaigning for the country’s general election.

With the third highest number of parliamentary seats among Indian states, West Bengal has emerged as a battleground where prime minister Narendra Modi’s Bharatiya Janata Party (BJP) is attempting to make inroads to offset likely losses elsewhere and retain power.

Modi’s party is facing stiff opposition from the Trinamool Congress, a regional party that controls the state and is one of Modi’s biggest critics.

More than 100 supporters of Modi’s party were detained for violence in West Bengal on Tuesday (14), police said.

The state police said no Trinamool member had been detained, but the independent election commission said it planned to investigate allegations of vandalism by party supporters.

In response to the violence, India’s election commission (ECI) suspended campaigning by political parties for the last phase of the staggered election a day before the deadline.

Voting is to be held in 10 constituencies on May 19 in the state, which sends 42 lawmakers to the Parliament.

India’s election started on April 11 and ends on May 19. The results will be announced on May 23.

“This is probably the first time that ECI has invoked Article 324 in this manner but it may not be last,” an election commission official said at a press conference on Wednesday (15).

The clashes broke out as BJP president Amit Shah led a campaign procession through Kolkata, and rival party supporters threw stones and water bottles at each other.

“The reason behind the violence is Trinamool Congress, not Bharatiya Janata Party,” Shah told reporters on Wednesday (15).

The Trinamool Congress, led by firebrand politician Mamata Banerjee, who is a contender for prime minister, blamed the violence on the BJP and said it planned to hold a rally today (15).

The authorities said soldiers were deployed in the city to ensure there was no further violence.

West Bengal has a history of election-related violence, initially between the communists who ran the state for nearly three decades and the main opposition Congress party.

But now the BJP and the regional Trinamool Congress have emerged as frontrunners, clashes are erupting frequently between their supporters.

“Elections matter in Bengal much more than most other states because (the) party is the only form through which people tend to organise themselves,” said Dwaipayan Bhattacharyya, a political science professor at New Delhi’s Jawaharlal Nehru University.