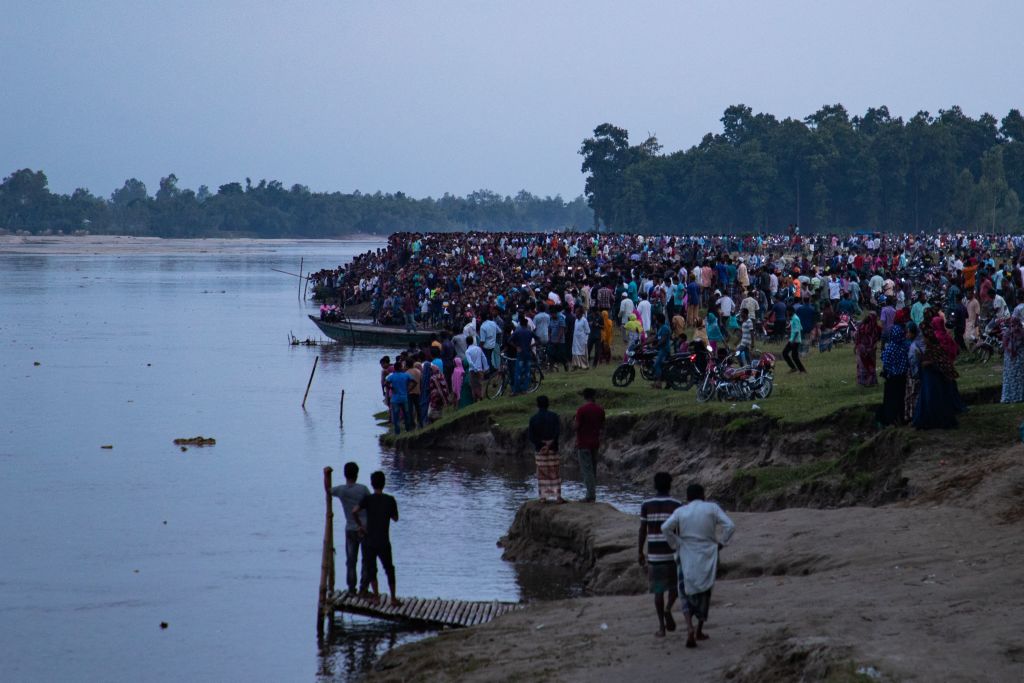 In this picture taken on September 25, 2022, people gather along the banks of the Karatoya river in Bangladesh after a boat capsized near the town of Boda. (Photo by FIROZ AL SABAH/AFP via Getty Images)

Bangladeshi authorities were racing against time on Monday (26) to find any survivors of the boat accident involving Hindu devotees, even as the death toll in the incident rose to at least 39, mostly children and women.

The devotees were heading towards the Bodeshwari Temple on the occasion of Mahalaya, the auspicious start of the Durga Puja festival, when the over-crowded boat capsized in the Korotoa River in the country’s northwestern Panchagarh district.

“Our rescuers retrieved nine more bodies (overnight)… search is continuing,” a fire service official told reporters at the scene. Some bodies were found in a river in Dinajpur.

The bodies had reportedly washed away due to strong current, another official said. Panchagarh additional deputy commissioner (revenue) Dipankar Roy said that a total of 39 bodies have been recovered so far. Among them, 11 are children, 21 are women and 7 are men, the Bdnews24.com reported.

Media reports quoting relatives said 58 passengers were missing while officials earlier said the boat was believed to be carrying as many as 80 passengers.

“The preliminary investigation shows that the boat was overcrowded,” Roy, head of the probe body, was quoted as saying by the Dhaka Tribune newspaper. However, he also noted that there may be other reasons behind why the boat sank, but that will be revealed after the committee finishes its investigation, the paper said.

“The boatman had asked some people to disembark to ease the weight-load. But no one listened,” said Solaiman Ali, the administrative chief of the sub-district. Eyewitnesses claim that there were more than 150 passengers on the boat.

Some people swim back to the river bank but many remain missing. Roy said fire service in Panchagargh is leading the search efforts. The Durga Puja is the biggest Hindu festival in Bangladesh and in eastern India.

Deltaic Bangladesh is crisscrossed by several hundred rivers while hundreds of people die each year in boat and ferry accidents in Bangladesh, largely due to overcrowding. Earlier in May, 26 people died after an overcrowded speedboat collided with a sand-laden bulk carrier and sank on the Padma River.