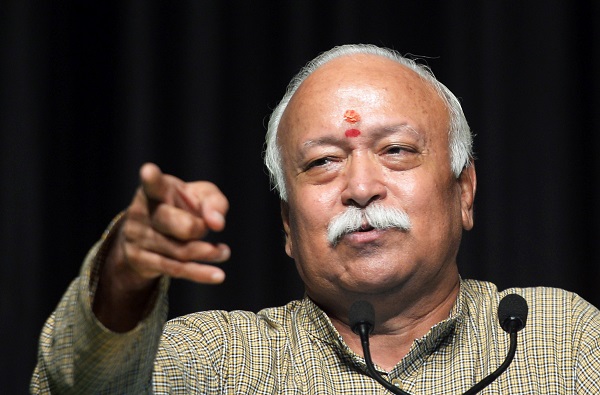 “The country is growing. But the world economy goes through a cycle, and at times it faces some hurdles that slow down the growth. Then it is called a slowdown,” Bhagwat said (Photo: DIBYANGSHU SARKAR/AFP/Getty Images).

“TOO much discussion” about the “so-called” economic slowdown is unwarranted as it makes businesses and people wary and leads to decline in economic activity, RSS chief Mohan Bhagwat said here on Tuesday.

He also said that RSS’s emphasis on `Swadesi’ meant self-reliance but not opposition to Foreign Direct Investment.

Addressing a gathering of the Rashtriya Swayamsevak Sangh on the occasion of Vijayadashmi here, he also said that disinvestment, if necessary, should be carried out.

Gross Domestic Product (GDP) is a “faulty” parameter to judge economy, he opined, amid concerns about India’s GDP growth.

“The country is growing. But the world economy goes through a cycle, and at times it faces some hurdles that slow down the growth. Then it is called a slowdown,” Bhagwat said.
“An economist told me that you call it recession only when you report growth rate of below zero. But we are having a growth rate of around five per cent. One can show concern towards it, but there is no need to discuss it,” he said.

“Discussion over it leads to creation of atmosphere, which affects (people’s) conduct. Too much discussion about so-called slowdown would make the people in business and trade believe that economy is really slowing down and they would become more conservative in their actions. It will eventually slow the growth of our economy further,” he said.

“The government has shown sensitivity towards the issue and has taken some steps….We need to trust our government. We have taken so many steps, there will be some positive impact in coming days,” he said.

“We will come out of this (slowdown) phase. The government is taking efforts. We need funds, for which government is encouraging FDI. Some major industries are being divested. When it (disinvestment) is necessary, there should not be any problem with it. It is a solution,” Bhagwat said.

Saying there were several “holes” in our economy from where the money drained out, Bhagwat praised the Narendra Modi government for putting a check on it effectively.

“One needs to remain tough and this government is tough on many fronts. Some among the common people suffer from such tough measures, but they face them for the country…. government needs to ensure that its tough economic measures do not cause suffering to the honest and common man,” he said.

“Some think that Swadeshi means breaking ties with the world. It is not at all like that,” he contended.

“Countries have been trading and having strong economic relations with each other more often than before. But which countries have such strong relations? The ones which are self-sufficient,” Bhagwat added.

“The things I can make at home, I will not buy it from market. If I have to buy it from outside, I should prefer local market and protect the local makers and their jobs… Having trade relations with other countries on our own terms is called Swadeshi,” he said.

“Such self-reliant country can have relations with other countries based on friendship and not on profit or loss. To attain such trust among foreign investors, we need to shift towards a self-reliant economy,” the RSS chief said.

In a barely veiled reference to China, Bhagwat said there is one country where if a foreign firm wants to set up a plant, a government nominee has be appointed to the board of directors and his approval is required for every decision.

“All the major companies in the world have accepted it. Then these companies acquire small companies from India. Name remains the same, but shares are held by some multinational company based in China,” he said.

“We need to stay alert about such indirect spread of empire. That is why we need to promote Swadeshi,” he said.

He also said that “parameters like GDP are inadequate, faulty and all the economists are saying so”.

“We need to have economic structure which is suitable for our country, which generates employment, is eco-friendly, consumes minimum energy and induces good economic behavior (`sad-niti’),” he said.