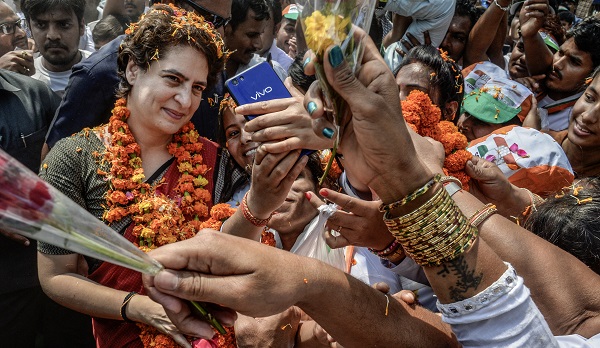 Priyanka again hit out at prime minister Narendra Modi, and said, “He doesnt reply to any of the issues that our party raised, and just talks about random things.” (Photo: Atul Loke/ Getty Images).

CONGRESS leader Priyanka Gandhi Vadra Sunday said it is “very clear” that the BJP will face defeat in Lok Sabha polls as people are “angry and distressed” and they will convey their sentiments through voting.

Interacting with reporters after exercising her franchise, the senior party leader said it was “very clear that the BJP government is going”.   ”

There is anger among people, and they are under distress. Modiji, instead of talking about real issues, has been talking about random things. And, now, they will express their anger against this government through voting,” the Congress general secretary said.

She said this will be witnessed especially in Uttar Pradesh.

Priyanka again hit out at prime minister Narendra Modi, and said, “He doesnt reply to any of the issues that our party raised, and just talks about random things.”

Congress campaigns on real issues and the prime minister has “not even responded to the challenge thrown by our party president (Rahul Gandhi) to debate on real issues,” she said.

He and his party had in 2014 promised to deposit Rs 1500000in every Indian’s bank account and create two crore jobs, but Prime Minister Modi “doesn’t talk about that”, she said.

Asked about the constant criticism the Nehru-Gandhi family faces from the BJP, she recounted an anecdote about her guru telling her the calmness that Lord Buddha had in face of detractors.

Priyanka was accompanied by her husband Robert Vadra who also cast his vote.

The seven constituencies in Delhi are voting on Sunday alongside 14 seats in Uttar Pradesh, 10 in Haryana, eight each in Bihar, Madhya Pradesh and West Bengal, and four in Jharkhand as part of the sixth phase of the 2019 poll which ends on May 19.

Counting of vote will take place on May 23. The Congress chief said that so far it has been a “good fight” in the elections.

Asked how many seats the Congress is winning, he said, “I won’t comment on that. It will be decided by the people.”

“People are the master. Whatever people say, we will accept. How many seats we will win, people will decide that… Jai Hind,” he said.

In Delhi, it is largely a three-way contest among the BJP, the Congress and the AAP.

In the 2014 Lok Sabha poll, all the seven seats in the national capital were won by the BJP. While the Congress is hoping to bounce back in Delhi, the AAP is keen to give a good fight.