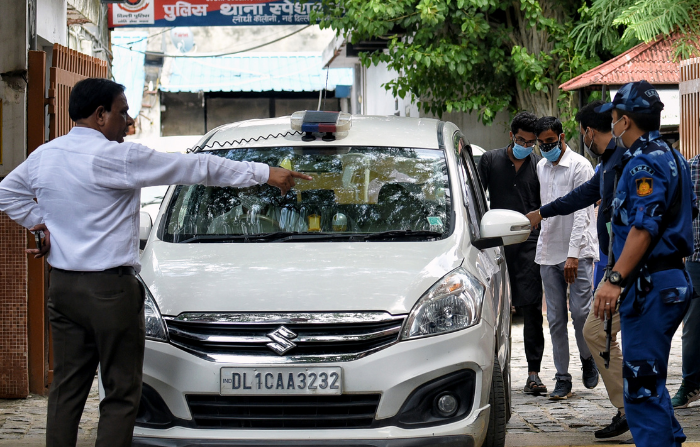 Officials escort one of the arrested members of a busted terror module in New Delhi on September 15, 2021. (ANI Photo/ Shrikant Singh)

A DAY after a terror module was busted, sources in Delhi Police Special Cell said it is believed to be in the first stage of the operation. According to a report by Asian News International, the module, which was coordinated and organised by Pakistan and its Inter-Services Intelligence (ISI), was being managed by underworld don Dawood Ibrahim’s brother Anees Ibrahim. Six people, including two Pakistan-trained terrorists who were planning to set off bombs in various parts of the country during the upcoming festival season, were arrested.

ANI cited sources to say that all the five suspects, apart from sleeper cell member Jaan Mohammad Sheikh, were given responsibility to conduct recce of various locations in the northern state of Uttar Pradesh and top Indian cities like Mumbai, Chennai and New Delhi, The locations were, however, not finalised.

“So far, it’s been unearthed that the ISI and underworld operatives were constantly giving targets of the operation to the six arrested,” they added.

The Delhi Police on Tuesday (14) said the six arrested included Jaan Mohammad Sheikh (47) of Maharashtra and Osama (22) alias Sami of Jamianagar, Delhi. The four others belong to different districts of Uttar Pradesh — Moolchand alias Lala (47) from Raebareli, Zeeshan Qamar (28) from Prayagraj, Md Abu Bakar (23) from Bahraich and Mohammad Amir Javed (31) from Lucknow. They were arrested on Tuesday (14) following a massive multi-state manhunt operation.

The sources also said that the arrested were informed about the weapons that were being arranged for them.

As per the Special Cell, these terrorists would have been taken across various locations in the coming days.

Initial investigation revealed that Sheikh alias Sameer, who is a resident of Mumbai’s Dharavi, was constantly in touch with Anees through WhatsApp. The data of his phone was found to be deleted during recovery and the device was sent to Delhi Cyber Cell for retrieval of the data.