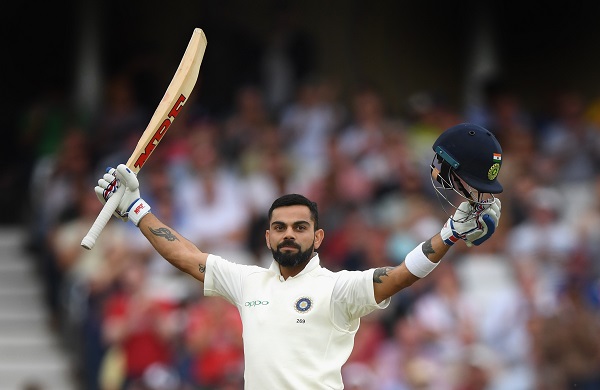 “CAPTAINCY is just a C in front of your name.” With that comment, simultaneously modest and magnanimous, Virat Kohli embraced all his teammates and gave them credit for a personal milestone as India’s most successful Test captain.

After beating West Indies by 257 runs in the second Test here on Monday (2), Kohli now has 28 wins from 48 Tests, surpassing Mahendra Singh Dhoni’s 27 wins from 60 Tests as captain.

“Captaincy is just a C in front of your name. It’s the collective effort that matters. It’s a by-product of the quality team we have here,” Kohli said on the newest record against his name.

“If you see these guys running in- (Mohammed) Shami’s spell today, (Jasprit) Bumrah after having a small niggle, Ishant (Sharma) bowling his heart out, (Ravindra) Jadeja bowling a long spell. If we didn’t have the bowlers we have, these results wouldn’t have been possible,” he added.

Sourav Ganguly and Mohammad Azharuddin are third and fourth in the list of successful Indian Test skippers with 21 and 14 wins respectively.

India has made a superb start to the World Test Championship and the win in the second match not only helped them sweep the series 2-0 but also put them on top of championship points table.

With 120 points from two games, India lead the nine-team table even though Pakistan, Bangladesh and South Africa are yet to begin their bilateral campaigns in the championship.

Under Kohli, India have achieved some memorable victories in both India and abroad. Earlier this year, India clinched their maiden Test series in Australia, beating the hosts 2-1 in their own backyard.

In the match here, India entered the fourth day needing eight wickets to win and Kohli’s men completed the task after lunch, dismissing the hosts for 210 in 59.5 overs in their chase of a near-impossible target of 468.

Such was India’s dominance in the two Tests that West Indies couldn’t even cross 250 in any of their four innings and the only half-century was scored by Shamarh Brooks (50) in this game.