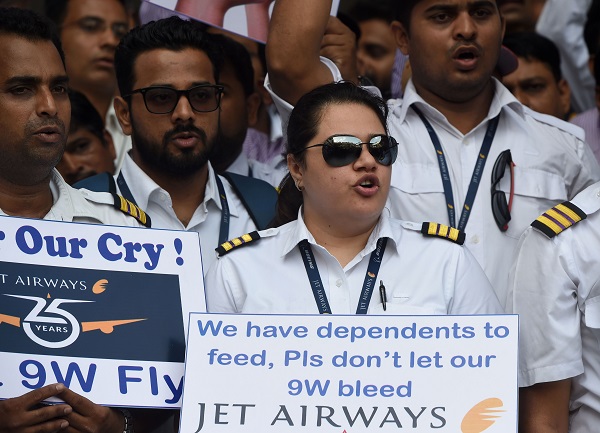 India’s Jet Airways employees hold placards during a protest in Mumbai on May 8, 2019. Debt-stricken Jet Airways halted all of its operations last month after failing to secure emergency funding from lenders (Photo: PUNIT PARANJPE/AFP/Getty Images).

INDIA’S biggest lender Friday (10) said it has received two unsolicited bids for Jet Airways, raising hopes for the revival of the debt-laden carrier which was forced to ground its entire fleet last month.

The State Bank of India (SBI) leads a consortium of 26 lenders owning a controlling stake in the Mumbai-based airline which was India’s second-biggest carrier by market share before funding woes brought it to the verge of bankruptcy.

SBI chairman Rajnish Kumar said he was hoping for one more buyer to enter the fray before the deadline for submitting bids ended at 1230 GMT today (10).

“Two unsolicited bidders have submitted EoI (expression of interest) for Jet and we are expecting one more bid by the end of the day,” Kumar told reporters without giving further details.

The lenders are offering up to 75 per cent stake in the company on a fully diluted basis, the Press Trust of India reported.

The SBI-led consortium has been looking to sell a controlling stake in Jet, shortlisting four potential buyers including Etihad Airways which already owns 24 per cent.

Jet, which has debts of more than $1 billion, has been in a tailspin for months. It has defaulted on loans and failed to pay many staff since the start of the year.

After its lenders declined to extend more funds, the carrier was forced to ground its entire fleet on April 17, triggering protests by thousands of employees who have been not paid salaries.

A collapse of Jet and the loss of more than 20,000 jobs would deal a blow to prime minister Narendra Modi’s pro-business reputation as he seeks a second term in ongoing national elections.

Its plight has been compared to that of India’s Kingfisher Airlines, which ceased operations in 2012 before later going bust, causing thousands of job losses and huge financial costs to lenders.

Shares of Jet Airways were up nearly three per cent Friday (10) on the Bombay Stock Exchange after SBI’s announcement.