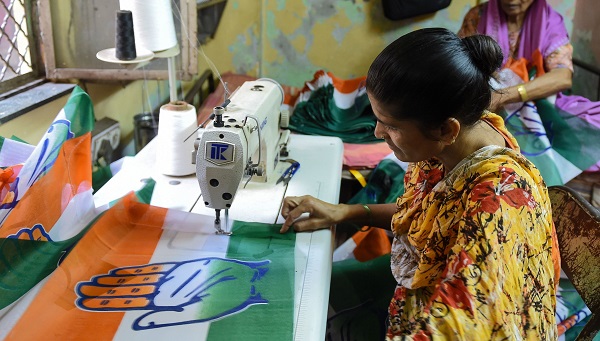 Job creation has emerged as one of the biggest issues in India’s staggered general election, which starts on April 11, with votes counted on May 23 (Photo: SAM PANTHAKY/AFP/Getty Images).

For up to 14 hours a day, Nagaraj Nataraj and his wife and daughter hunch over sewing machines, churning out flags for the parties vying for votes in India’s upcoming general election.

They are among tens of thousands of home workers toiling to meet soaring demand for party merchandise from flags to t-shirts to caps ahead of the biggest exercise in democracy the world has ever seen.

Despite the urgency, it is far from lucrative work. The Nataraj family earn between Rs 1 and Rs 10 for each flag they produce, forcing them to work from dawn to dusk to ensure a decent wage.

Job creation has emerged as one of the biggest issues in India’s staggered general election, which starts on April 11, with votes counted on May 23.

But labour rights advocates say political parties are building their campaigns on the back of cheap casual labour- the very thing that many claim to be fighting.

“These orders don’t go to big factories, because the prices would go up,” said Nataraj by phone from Tirupur, a garment manufacturing hub in southern Tamil Nadu state.

“They give it to us instead and pay us lower wages. We agree because we don’t have options.”

Election campaigns in India are a colourful affair, with supporters dressing up in party colours and candidates doling out t-shirts, caps, scarves, masks and crowns at rallies.

Much of that merchandise is made by women working from home, and that, combined with a lack of supply chain transparency, makes it difficult to ensure the minimum wage or to spot forced labour conditions, activists said.

“The big campaign talking point today is unemployment, but nobody is talking about the condition of those employed in this work,” said Amarnath Sharma, general secretary of the Garment and Allied Workers Union.

“Wages should be a poll issue, instead, the exploitation of workers continues even when they are making election material.”

India’s main opposition Congress party, which this week pledged to prioritise the creation and protection of jobs, said it was unable to identify all the manufacturers of its flags.

“It is a very complex supply chain, especially where home workers are involved,” said Shahnaz Rafique, the party’s national coordinator for garment and home-based workers.

“And with outsourcing, we are aware that sometimes even minimum wages are not guaranteed. It is something we will look into.”

Representatives of Prime Minister Narendra Modi’s Bharatiya Janata Party (BJP) were either unaware or unconcerned about how election-themed clothing and merchandise was being produced.

A link on the party’s website takes fans to NaMo Merchandise, where t-shirts are on sale for as little as 120 rupees. Modi-themed merchandise is also available via a dedicated app and from vending machines at party rallies.

“It has become a craze,” said Rohit Chahal, head of national media for the BJP’s youth wing.

“I don’t know where the t-shirts are coming from, but I know who is buying them and wearing them. Sourcing is not our concern. Our aim is to bring Prime Minister Modi back with a bigger majority. It is about visibility.”

One Delhi-based manufacturer, Vimal Sharma, has already sent out more than 100,000 t-shirts printed with either Modi’s face or his campaign slogan, and orders are still flooding in.

“These are very cheap and fast-moving products,” Sharma told the Thomson Reuters Foundation.

“Supporters are ordering thousands of these t-shirts and distributing them for free at political rallies or to friends and families. As a result, the prices are rock bottom.”

So are the margins – the lowest price Sharma has been quoted for making the t-shirts is 60 Indian rupees, meaning he stands to make less than one rupee.

The women he outsources work to are paid up to Rs 120 for every 1,000 flags they sew, depending on size, he said.

“The money is in the quantity, and if they stitch thousands, they ensure themselves a decent wage,” Khan said.

“But there are no other job options for them, so this is better than nothing.”

Aloysius Arokiam of Social Awareness and Voluntary Education (SAVE), a civil society group that works for garment worker rights in Tirupur, said it was “almost impossible” for people making these products to make the legal minimum wage.

“An entire family working all day may still not make minimum wages guaranteed by the state, because all political parties want this material very cheap,” he said.

Modi swept to power in 2014 promising jobs for India’s growing youth population, but his political rivals have raised concerns in their campaigns about continuing high unemployment.

Congress leader Rahul Gandhi said as the party launched its manifesto that the country’s main concerns were “unemployment and farmer distress” and the economy needed to be “restarted”.

India’s unemployment rate rose to 7.2 per cent in February, up from 5.9 per cent in the same period last year, according to data from the Centre for Monitoring Indian Economy think tank.

Modi has repeatedly promised to create more employment, including by attracting the kind of foreign manufacturing that has helped China pull millions out of poverty.

For now, much of the country’s manufacturing capacity lies in the homes of poor Indians trying to scratch a living.

Research released in February showed that while the Indian garment sector employs more than 12 million people in factories, millions more work from home.

In Tirupur, workers are under pressure to deliver within weeks of campaign orders coming in.

“I wake up at six and immediately sit at my machine,” said Nataraj.

“If we want to earn enough to eat two square meals, we need to stitch relentlessly. The money is meagre and so the hours count.”

Sharma, the union leader, said none of the politicians out canvassing for votes really cared about the workers’ conditions.

“There are only promises of a better future, but no details on how wages will be increased and work place conditions improved,” he said. “These workers remain invisible.”