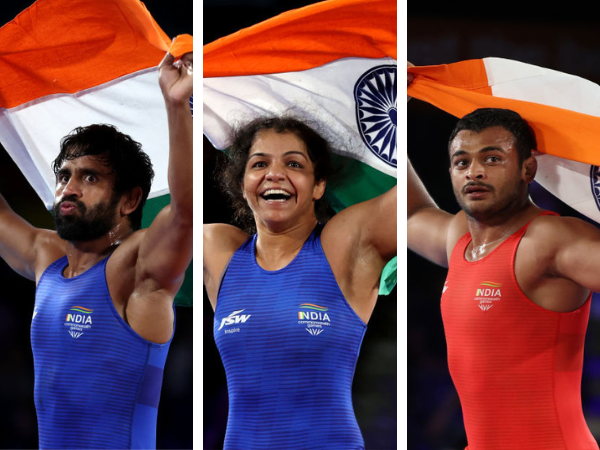 India saw a gold rush at the ongoing Commonwealth Games in Birmingham on Friday (5) with its wrestlers winning as many as three golds, two bronzes and a silver in different categories of the sporting event.

Deepak Punia completed the hat-trick of golds after won the top medal in the men’s 86 kilogram (kg) freestyle defeating Pakistan’s Muhammad Inam 3-0. He began with a technically superior win over New Zealand’s Matthew Clay and then humbled Sierra Leone’s Sheku Kassegbama and Canada’s Alexander Moore to set up the gold clash with Inam. Moore, along with Australia’s Jayden Lawrence, won bronzes.

Bajrang Punia successfully defended his Commonwealth Games title by defeating Canada’s Lachlan McNiel in the men’s 65 kilogram (kg) freestyle final. He won the bout 9-2 and those were the only points that he conceded throughout the day to reach the top of the podium. Pakistan’s Inayat Ullah and England’s George Ramm won the bronze medals.

Sakshi Malik, who won a bronze at the Rio Olympics in 2016, defeated Canadian Ana Paula Godinez Gonzalez in the final of the women’s 62 kg freestyle to clinch the gold. Gonzalez was dominating the match initially as she gained a 0-4 lead in the first period but Malik returned strong to make it 4-4 and won the match via fall. Malik earlier entered the finals by defeating Etane Ngolle of Cameroon by 10-0 on the basis of technical superiority. Esther Omolayo Kolawole of Nigeria and Berthe Emilienne Etane Ngolle of Cameroon won the bronze medals.