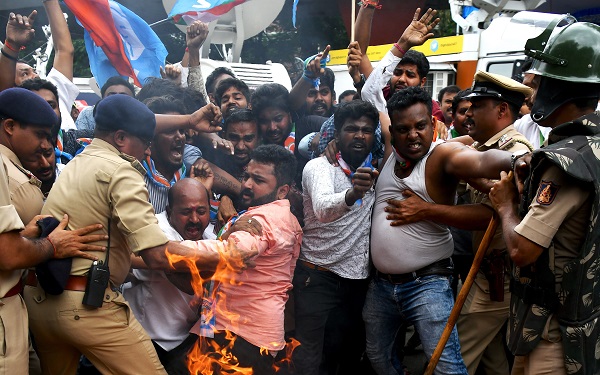 Members of the Karnataka Congress scuffle with police as they burn burn tyres and shout slogans against Indian prime minister Narendra Modi and home minister Amit Shah during a protest staged by the party in Bengaluru on September 4, 2019, following the arrest of Karnataka Congress leader and party strongman DK Shivakumar (Photo: MANJUNATH KIRAN/AFP/Getty Images).

THE Congress staged protests in several parts of Karnataka on Wednesday (4) against the arrest of senior Congress leader D K Shivakumar by the Enforcement Directorate, in a money laundering case.

Quoting reports he has received, Karnataka Home Minister Basavaraj Bommai said five to six buses were pelted with stones and attempts made to torch one bus each in Kanakapura and Bengaluru.

Police sources said demonstrations, shutting of shops and attempts to block roads by burning tires were reported from Ramanagara, Kanakapura, Chennapattana, Bidadi and a few neighbouring towns, where a bandh has been called by Shivakumar’s supporters.

Shivakumar’s Kanakapura assembly segment is in Ramanagara district, most parts of the which come under Bengaluru Rural Lok Sabha constituency represented by his brother D K Suresh.

As a precautionary measure, the district administration has declared holiday to schools and colleges on Wednesday.

Calling for “peace”, Bommai instructed officials to take all necessary steps to maintain law and order.

Bommai, who held a meeting with senior police officials, met Chief Minister B S Yediyurappa earlier in the day and briefed him about the situation.

Shivakumar, a Congress troubleshooter from the state, was arrested under the provisions of the Prevention of Money Laundering Act after he appeared before the ED for questioning for the fourth time on Tuesday at its headquarters in Delhi.

Congress in Karnataka had given a call to all its district units for staging protests on Wednesday against the arrest.

At a few places, Congress’ alliance partner in the previous coalition government, JD(S) too joined the protest.

Both parties have accused BJP-led government at the Centre of “vendetta politics” against political opponents, using central agencies.

However, the BJP said investigating agencies have “strong evidence” against Shivakumar andrejeced the Congress charge of “political vendetta” behind his arrest.

It has now become fashionable for the Congress leaders to claim vendetta even when specific allegations or specific charges of a financial misdemeanor, money laundering and all such financial crimes come to the fore, BJP national spokesperson G V L Narasimha Rao told.

Meanwhile, commenting on Shivakumar’s arrest, former Prime Minister H D Deve Gowda said Shivakumar has appeared before the ED for four days and responded to all their queries without showing any non-cooperation.

The JD(S) patriarch termed the ED’s decision to reject Shivakumar’s request for relaxation to pay tributes to his father and ancestors on Ganesh Chaturti day as per family traditions as “inhuman”.