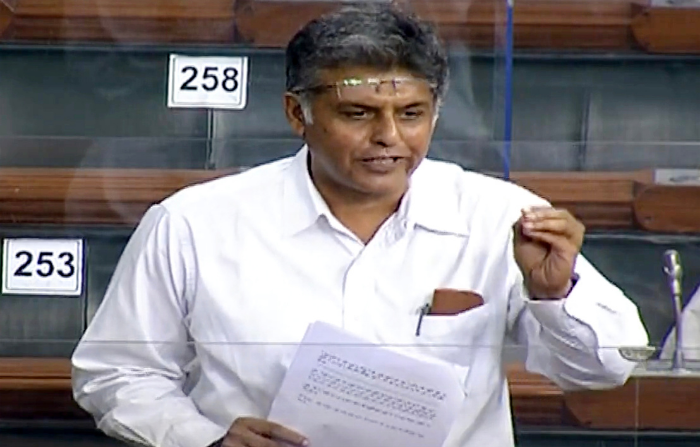 AT a time when the Indian National Congress is facing internal trouble, a new book written by the party’s senior parliamentarian and former central minister Manish Tiwari has added fuel to the fire.

The book, titled ‘10 Flash Points; 20 Years – National Security Situations That Impacted India’, has triggered a fresh row just days after the controversy over comparisons between ‘Hindutva’ and Islamist terror groups by another senior Congress leader Salman Khurshid and days before the 13th anniversary of the 26/11 terror attacks in Mumbai that killed more than 150 people, including foreigners.

The publication of Tiwari, who represents Anandpur Sahib constituency in the northern state of Punjab, says India should have acted against Pakistan after the 26/11 mayhem and the ruling Bharatiya Janata Party (BJP) slammed the grand-old party over it, calling it a “confession of the failures of the Congress”.

Survivor of 26/11 gets message from Modi on Bar Mitzvah

“ (With reference to) what Manish Tewariji said in his book, which we all have seen in the media, it would not be wrong to say that the facts that have come out. It would be appropriate to call it a confession of the failure of the Congress….” the BJP’s Gaurav Bhatia told reporters.

“The gist of this book is that restraint can be considered weakness… India should have taken strict action (after the 26/11 attacks) … Today it became clear the Congress government was insincere, useless… they were not even concerned about issues like national security,” he added.

“Congress President Sonia Gandhiji, Rahul Gandhiji will you break your silence today? Sonia Gandhiji, our question is why India’s brave army was not given permission and free will at that time?” Bhatia asked.

In his book, Tiwari wrote what many thought was a dig at the United Progressive Alliance government led by his own party in New Delhi between 2004 and 2014, “For a state that has no compunctions in brutally slaughtering hundreds of innocent people, restraint is not a sign of strength; it is perceived as a symbol of weakness. There comes a time when actions must speak louder than words. 26/11 was one such time when it just should have been done. It, therefore, is my considered opinion India should have actioned a kinetic response in the days following India’s 9/11.”

Happy to announce that my Fourth Book will be in the market shortly – '10 Flash Points; 20 Years – National Security Situations that Impacted India'. The book objectively delves into every salient National Security Challenge India has faced in the past two decades.@Rupa_Books pic.twitter.com/3N0ef7cUad

Manmohan Singh was the prime minister of India at the time while Shivraj Patil was the home minister. He was removed just days after the 26/11 terror attacks and was succeeded by P Chidambaram.

He said his book “objectively delves into every salient national security challenge India has faced in the past two decades”.

Tiwari is part of the Congress’s G-23 leaders who have expressed concerns about the party’s leadership, including the Gandhi family. He was also critical of Navjot Singh Sidhu, the president of the party’s Punjab unit, over his recent remark about Pakistani prime minister Imran Khan being his ‘bada bhai’ (elder brother).

The BJP mocked the Congress over Tiwari’s observations with one from the camp saying the grand-old party’s leaders were busy throwing the UPA under the bus to sell their books. His words targeted Tiwari as well as Khurshid.

After Salman Khurshid, another Congress leader throws UPA under the bus to sell his book.

Manish Tewari in his new book slams the UPA for weakness in the name of restrain post 26/11.

Tiwari, however, hit back at the BJP’s criticism saying he was “rather amused” by the saffron party’s reaction to “one excerpt from a 304-page-book”.

In a tweet, he said, “I am rather amused at @BJP4India reaction to one excerpt from a 304 Page book that tries to dissect responses to National Security Situations that Impacted India.I wonder would they react similarly to some “hard analysis’ about their handling of the National Security Remit also?”

I am rather amused at @BJP4India reaction to one excerpt from a 304 Page book that tries to dissect responses to National Security Situations that Impacted India.I wonder would they react similarly to some “hard analysis’ about their handling of the National Security Remit also?