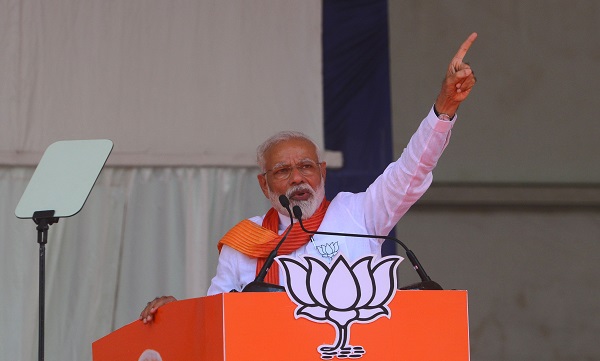 “I appeal that all of you must participate in the festival of democracy and exercise your right to franchise in great numbers,” he said (Photo: SAM PANTHAKY/AFP/Getty Images).

PRIME MINISTER Narendra Modi on Tuesday accused Congress leaders of spreading rumours over Article 370 in India and the world.

While addressing a rally at Charkhi Dadri in poll-bound Haryana, Modi said the people of the state have decided to put their stamp on the clean and transparent administration of the BJP government and bring it back to power.

“People of Haryana have decided to bring BJP back to power,” Modi said.

With wrestler Babita Phogat entering into the political ‘dangal’ as the BJP candidate for the Dadri assembly seat, Modi said daughters of Haryana have proved their mettle in all fields.

Twenty-nine-year-old Babita Phogat became a household name after ”Dangal” (wrestling ring), a film about the struggle of her father and noted wrestling coach Mahavir Singh Phogat to train her and her sister Geeta Phogat, became a runaway hit.