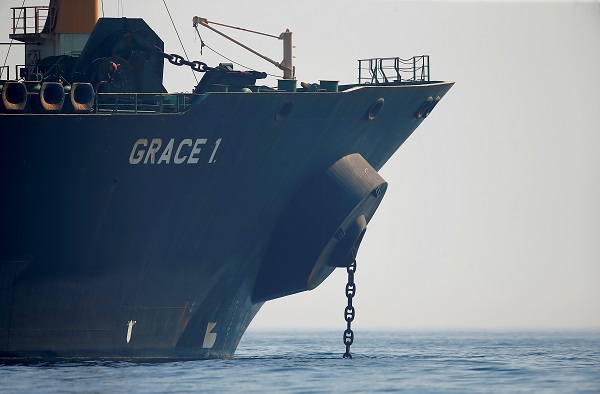 Iranian oil tanker Grace 1 sits anchored awaiting a court ruling on whether it can be freed after it was seized in July by British Royal Marines off the coast of the British Mediterranean territory, in the Strait of Gibraltar, southern Spain (REUTERS/Jon Nazca).

INDIA on Thursday (15) confirmed the release of 24 Indian crew members aboard an Iranian oil tanker.

The officials in Gibraltar have finally dropped all charges against the Indian crew members.

V Muraleedharan, India’s minister of state for external affairs confirmed the release of his countrymen and tweeted: “Spoke to our High Commission @HCI_London on VLCC Grace 1. They confirmed all 24 Indian crew aboard VLCC Grace 1 have been released by Gibraltar authorities and are free to return to India.”

The Indian Captain of Grace 1 supertanker thanked all who had facilitated for his and others’ release.

The oil tanker was seized by the local authorities at Europa Point in Gibraltar last month.

Gibraltar is a British Overseas Territory on the Spanish coast.

The tanker was stopped and detained following the charges of carrying crude oil to Syria in violation of EU and US sanctions.

Gibraltar has said in a statement that the police proceedings against four members of the crew have finally stopped.

The detained Indian crew members- the Master, Chief Officer and two Second Mates were aboard the supertanker.

A total of 28 crew onboard the vessel also include Russians, Latvians, and Filipinos. The crew members spent over a month in detention on board the ship since it was seized in July.

G20 declaration shows members not in agreement over Russia-Ukraine conflict

Canada to allow permanent residents to serve in its military; Indians may benefit