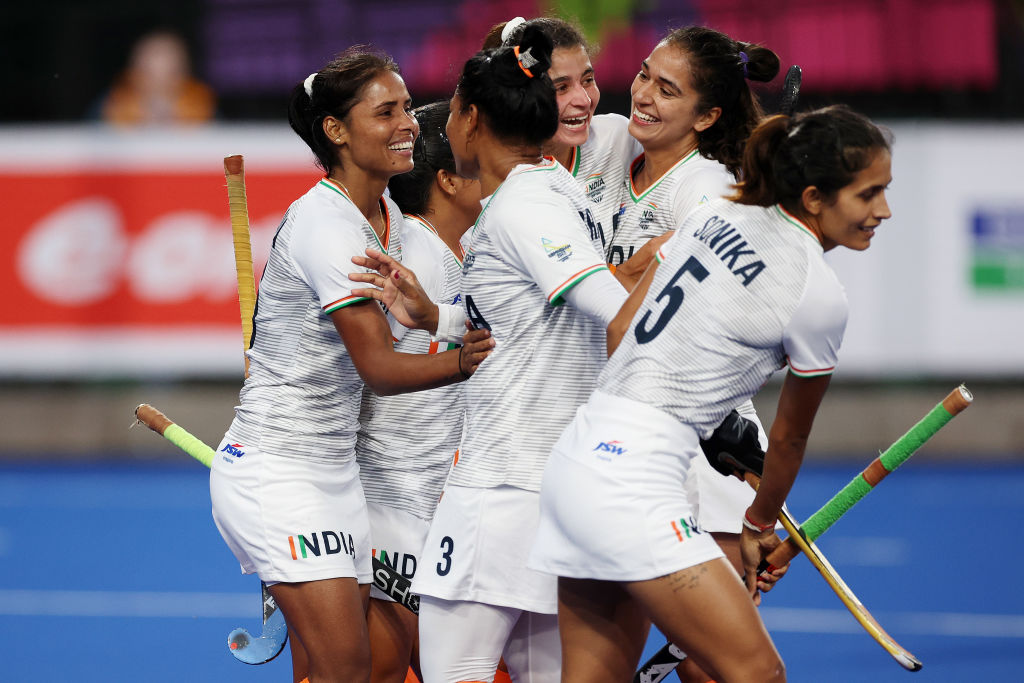 The Indian women hockey team celebrates after scoring a goal against Wales at the Commonwealth Games 2022 in Birmingham, UK, on Saturday, July 30, 2022. (Photo by Eddie Keogh/Getty Images)

REVENGE will be on Indian women hockey team’s mind when it takes on England in Birmingham on Tuesday (2), in what will be its first real test at the ongoing Commonwealth Games.

The Indians have registered back-to-back victories — 5-0 over Ghana and 3-1 against Wales — in their first two Pool A matches but the Savita Punia-led side was far from convincing in their displays.

But come Tuesday, there should be extra motivation for India as it is the same English side, which had dashed their medal hopes at the Tokyo Olympics.

The team came tantalisingly close to winning its maiden Olympic medal before losing 3-4 to England in the bronze medal play-off match.

To add it, it was again England which denied India a medal in the last CWG in Gold Coast. The Indians had then lost 0-6 in the bronze medal match to miss out on a podium finish.

So, naturally the Indians would be etching for revenge.

But it would be easier said than done as England are placed fifth in the world rankings as against India’s ninth position. The Indians would take a lot of heart from the fact that they held England to a 1-1 draw in the recently-held World Cup, jointly hosted by Spain and Netherlands.

“England are a good team and they have the home advantage as well in Birmingham. It will be a challenging match for us, but we have also been in good form after our first two wins,” skipper Savita said.

“We have played England a few times in the recent past, so both teams know each other quite well. They have won a couple of big matches against us as well, so they’re a strong team, but we have done our homework and it will be all about getting the basics right on the day.

“It is a crucial game in the competition and we are focused on our targets,” she added.

Even though Gurjit scored from a few penalty corners in the competition, the conversion rate remains a big concern for India’s chief coach Janneke Schopman.

The forward line too needs to put its best forward if India desire to upstage England. Vandana Katariya has been the star performer for India in the strike force, scoring two poaching goals against Wales but she needs more support from the likes of Lalremsiami and Sharmila Devi.

The team also needs to work on its link-up play between the midfield and forwardline to create more chances from open play.

A win on Tuesday will guarantee India a place in the semifinals of the competition. The Indians will round off their pool engagements against Canada on Wednesday (3).