Day-Time Restrictions Eased In Most Parts Of Valley 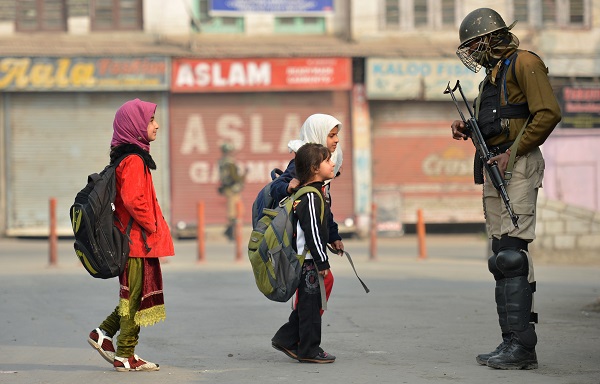 There were no curbs during the day in over 90 per cent of the Valley with the situation being eased in 92 police station areas in view of the improving situation, officials said (Photo: TAUSEEF MUSTAFA/AFP/Getty Images).

DAY-time restrictions were eased in most parts of Kashmir on Tuesday (3) but markets remained shut and public transport off the roads for the 30th day since August 5 when the Indian government revoked the state’s special status.

There were no curbs during the day in over 90 per cent of the Valley with the situation being eased in 92 police station areas in view of the improving situation, officials said.

However, many private vehicles were on the road, and inter-district cabs as well as auto-rickshaws were plying in some few areas.

A few vendors put up stalls in Srinagar’s Civil Lines area, including at the Lal Chowk-TRC Chowk-Dalgate axis in the heart of the city, the officials added.

They said barricades were removed from most areas of the Valley, but the deployment of security forces continued on the ground to maintain law and order.

Landline telephones, officials said, were restored in 76 of 95 exchanges. However, services continued to be suspended in the commercial hub of Lal Chowk and Press Enclave here as well in a few other areas of the Valley, they added.

The officials said mobile services and internet, including BSNL’s broadband and private leased-line internet, remained snapped across the Valley, except in the Kupwara and Handwara police station areas.

Government offices are fully functional and staff attendance is good too, they said. Over 4,000 primary, middle and high schools were functional in Kashmir. The attendance of teachers has improved and the attendance of children, though low in some places, is also improving, officials added.