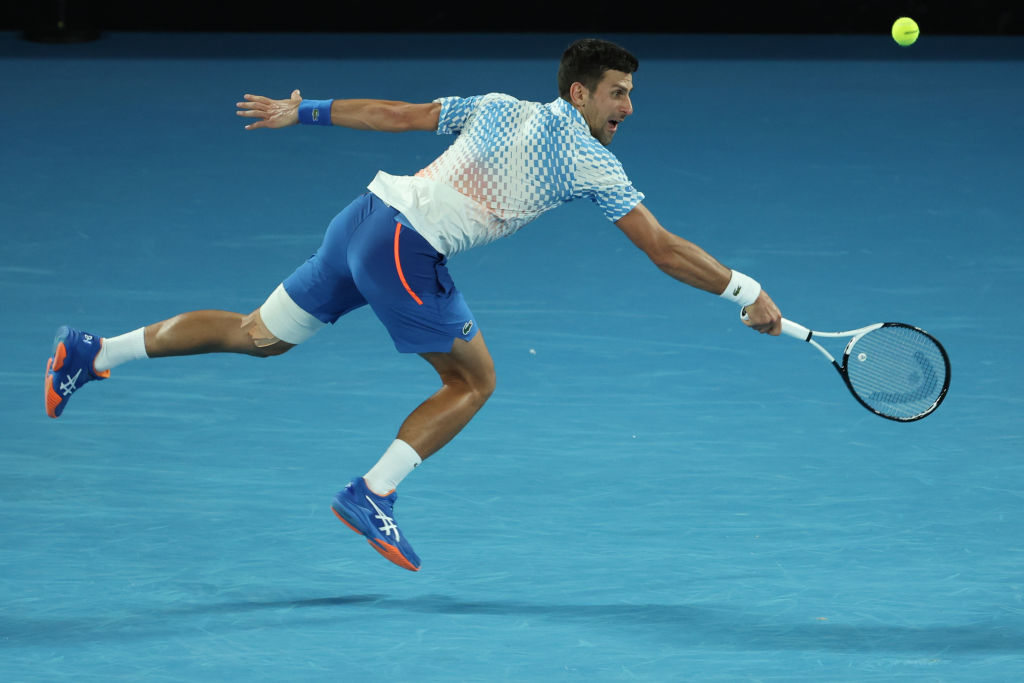 Novak Djokovic of Serbia plays a backhand during the fourth round singles match against Alex de Minaur of Australia during Day 8 of the 2023 Australian Open at Melbourne Park on January 23, 2023 in Melbourne, Australia. (Photo by Lintao Zhang/Getty Images)

With his left thigh again heavily strapped, the 35-year-old was a man on a mission, expending as little energy as possible in a 2hrs 6mins romp to inch within sight of Rafael Nadal’s slam record.

He will meet fifth seed Andrey Rublev for a semi-final berth after the Russian toppled Danish teen Holger Rune in a tense five-set clash on the same court.

“I really wanted to win in straight sets,” said Djokovic, who will return to world number one for the first time since June if he wins the tournament.

“Obviously you never know what’s going to happen on the court … I thought first four or five games were quite close, but after one break in the first set I felt more loose and free to go through the ball and be more aggressive.

“I played the best match of this year so far.”

Victory put him into a 13th Melbourne quarter-final to move fourth on the all-time list behind Roger Federer, Nadal and John Newcombe.

It is his 54th Grand Slam quarter-final in total — second only to the retired Federer’s 58.

De Minaur, who recorded his first victory against a top-five player in November when he beat Daniil Medvedev at the Paris Masters, was always facing an uphill climb.

Djokovic has not lost in Melbourne since 2018 — he did not play in 2022 — and has now won 25 consecutive matches at the Australian Open.

He always had the measure of the young Australian and broke to love in game six, consolidating without dropping a point for 5-2.

With de Minaur struggling under the pressure, he sent a baseline forehand long to hand the Serb another break and the set in just 35 minutes.

Only 54 percent of De Minaur’s first serves went in compared to Djokovic’s 76 percent, with the winners 9-1 in favour of the dominant Serb.

De Minaur won the sixth game in the second set, ending a run of nine consecutive losses, but it was only a brief moment of respite.

Djokovic stretched his hamstring at the changeover and immediately applied pressure again on De Minaur’s first service game to break again in the third set, all but ending the match.