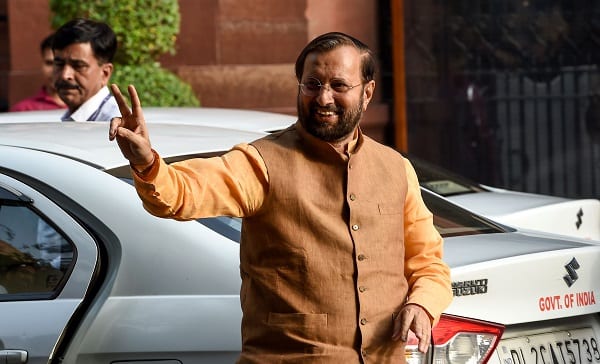 DOORDARSHAN India will soon be available all over the world, India’s Information and Broadcasting minister Prakash Javadekar said on Monday, asserting that credibility is the national broadcaster’s unique selling proposition.

Javadekar made the remarks at the celebrations marking the 60th Foundation Day of DD at the Doordarshan Bhawan here.

The minister highlighted the role played by Doordarshan in its journey of the last 60 years, reminiscing about the programmes and highlighting how the broadcaster has continued to enthral audiences over the decades.

Javadekar talked about the modern technological changes brought about by Doordarshan in adopting digital means and becoming available on phone through a mobile application.

He also talked about the immense growth of DD Free Dish and how every channel now aspires to be showcased on the platform.

Asserting that credibility is the unique selling proposition of Doordarshan, Javadekar said DD India will soon be available all over the world.

Stressing on improving quality of content, Javadekar lauded Prasar Bharati for its decision to bring in creative heads for various Doordarshan channels.

“We have to become no. 1 again. Earlier, we were no. 1 when there was no one, now there are so many channels,” Javadekar said.

“India is becoming a super power and it will become one under Prime Minister Narendra Modi’s leadership. Prime Minister Modi will be going for the ‘Howdy, Modi!’ diaspora event in Houston and President Trump is also coming there, this is also a manifestation of India’s power,” he said.

I&B Ministry Secretary Amit Khare said both Doordarshan and DD News have evolved with time through adoption of latest technologies.

Underling that Doordarshan is the largest public broadcaster, he said in today’s “age of breaking news”, Doordarshan has been able to maintain its tradition of providing accurate and up to date information to its viewers.

The poem has been specially dedicated to Doordarshan by Bachchan as his personal tribute.

Ambassador of Korea Shin Bongkil was also present on this occasion.

A special brochure on Doordarshan was also released by Javadekar.

Awards were also given out to Doordarshan officials in various categories.

Doordarshan turned 60 on Sunday bringing back memories of a golden period when entertainment in the country revolved around serials such as Mahabharata, Fauji and Malgudi Days.

People turned nostalgic on Twitter to mark the public service broadcaster of India’s 60 years with several of them asking on social media “which is your favourite DD shows”.

Entertainment shows like Chitrahaar, Mahabharat, Dekh Bhai Dekh, Fauji, Malgudi Days, Ramayana, Hum Log, Buniyaad, Surabhi, among others, captured the imagination of the Indian public in the late 80s and early 90s, and still remain etched in people’s minds as pure entertainment that brought people together.