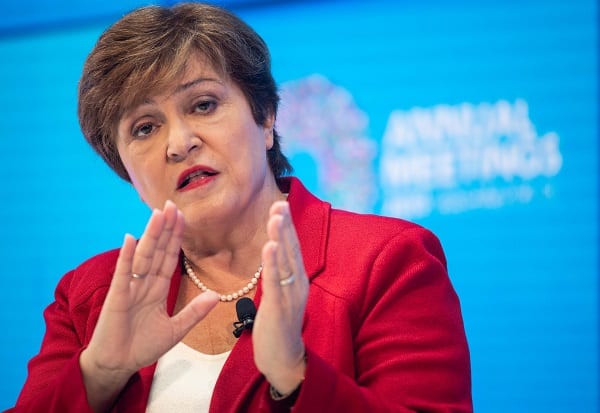 “In 2019, we expect slower growth in nearly 90 per cent of the world. The global economy is now in a synchronized slowdown,” Georgieva said on Tuesday (8) in her curtain raiser speech for the IMF and World Bank’s annual meeting here next week (Photo: NICHOLAS KAMM/AFP via Getty Images).

THE global economy is witnessing “synchronized slowdown”, which will result in slower growth for 90 per cent of the world this year, and the effect is even “more pronounced” in some of the largest emerging market economies like India, new IMF chief Kristalina Georgieva has warned.

The Managing Director of International Monetary Fund (IMF) pointed out that the widespread deceleration means that growth this year will fall to its lowest rate since the beginning of the decade.

She said the World Economic Outlook to be released next week will show downward revisions for 2019 and 2020.

“In 2019, we expect slower growth in nearly 90 per cent of the world. The global economy is now in a synchronized slowdown,” Georgieva said on Tuesday (8) in her curtain raiser speech for the IMF and World Bank’s annual meeting here next week.

The headline numbers reflect a complex situation, she added.

Despite this overall deceleration, close to 40 emerging market and developing economies are forecast to have real GDP growth rates above five per cent- including 19 in sub-Saharan Africa, the IMF chief said.

In the US and Germany, unemployment is at historic lows. Yet across advanced economies, including in the US, Japan and especially the euro area, there is a softening of economic activity, she said.

“In some of the largest emerging market economies, such as India and Brazil, the slowdown is even more pronounced this year. In China, growth is gradually coming down from the rapid pace it saw for many years,” Georgieva said.

The precarious outlook presents challenges for countries already facing difficulties- including some of the Fund’s programme countries, she noted.

“Now is the time for countries with room in their budgets to deploy- or get ready to deploy- fiscal firepower. In fact, low interest rates may give some policymakers additional money to spend,” she said.

Referring to a new IMF research, which shows how structural reforms can raise productivity and generate enormous economic gains, she said these changes are the key to achieving higher growth over the medium and long-term.

“The right reforms in the right sequence could double the speed at which emerging markets and developing economies reach the living standards of the advanced economies,” Georgieva said.

While the need for international cooperation is going up, the will to engage is going down, she rued.

“Trade is a case in point. And yet, we need to work together. From safely adapting to fintech, to fully implementing the financial regulatory reform agenda, to fighting money laundering and the financing of terrorism,” Georgieva said.

Describing climate change as a crisis where no one is immune and everyone has a responsibility to act, she said one of its priorities was to assist countries as they reduce carbon emissions and become more climate-resilient.

At the current average carbon price of $2 per ton, most people and most companies have little financial incentive to make this transition. Limiting global warming to a safe level requires a significantly higher carbon price, she added.