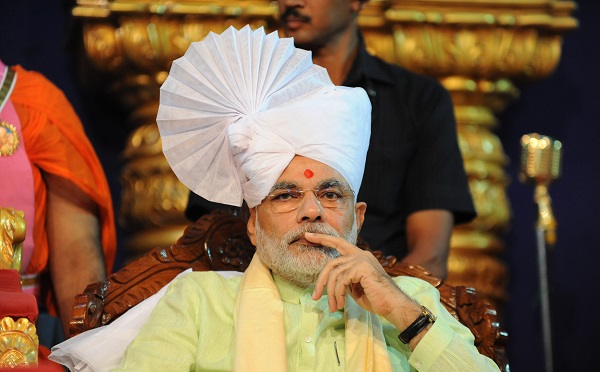 The order made late Thursday (11) was the commission’s second blow to the Modi re-election campaign in 48 hours, after it postponed the release of a flattering movie about the 68-year-old prime minister until after voting finishes (Photo: SAM PANTHAKY/AFP/Getty Images).

INDIAN election officials have ordered a clampdown on a television channel devoted to prime minister Narendra Modi which they say breaches campaign rules.

As the country of 1.3 billion people embarks on its huge vote, the Election Commission said NaMo TV, which is sponsored by Modi’s party, had to submit all of its content for approval.

Under Indian election rules, any content deemed campaign material including adverts, films, and even social media needs permission from the election body.

The order made late Thursday (11) was the commission’s second blow to the Modi re-election campaign in 48 hours, after it postponed the release of a flattering movie about the 68-year-old prime minister until after voting finishes.

NaMo TV, offered free on multiple television platforms, shows 24-hour programmes on Modi rallies, speeches, and even rap songs and dance routines devoted to the normally austere leader. It was being broadcast as normal on Friday (12).

The Election Commission of India, an autonomous body which oversees the six-week voting marathon that began Thursday (11), said NaMo TV had flouted election rules which aim to provide a level playing field for political parties.

It said that the channel is “sponsored” by Modi’s Bharatiya Janata Party (BJP) and “all political advertisements and recorded programmes with political contents are mandatorily required to be pre-certified” before they can be shown.

On Wednesday (10), the commission said Modi biopic ‘PM Narendra Modi’, which tells of the leader’s ascent from selling tea at a train station to prime minister, could not be released during the election.

The producers had insisted they have no links to the BJP.