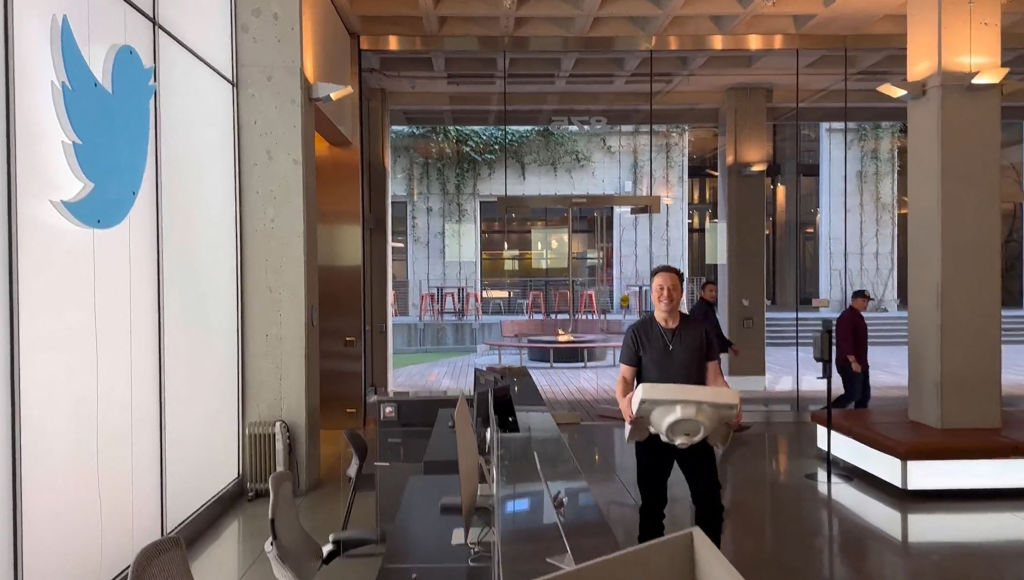 This video grab taken from a video posted on the Twitter account of billionaire Tesla chief Elon Musk on October 26, 2022 shows himself carrying a sink as he enters the Twitter headquarters in San Francisco. Elon Musk changed his Twitter profile to “Chief Twit” and posted video of himself walking into the social network’s California headquarters carrying a sink, days before his contentious takeover of the company must be finalized. (Photo by various sources / AFP) (Photo by -/Twitter account of Elon Musk/AFP via Getty Images)

Despite doubting his intentions multiple times to follow through with the $44 billion Twitter acquisition deal, Tesla chief executive officer (CEO) Elon Musk is now in charge of Twitter, CNBC reported.

As per sources, Twitter CEO Parag Agrawal and finance chief Ned Segal have left the company’s San Francisco headquarters and will not be returning as Musk began the purge of executives after closing the expected deal.

Vijaya Gadde, the head of legal policy, trust, and safety was also fired, as per media reports.

the bird is freed

However, Musk soon began sowing doubt about his intentions to follow through with the agreement, alleging that the company failed to adequately disclose the number of spam and fake accounts on the service.

Earlier when Musk said he was terminating the deal, Twitter sued the billionaire, alleging he “refuses to honour his obligations to Twitter and its stockholders because the deal he signed no longer serves his personal interests,” however, he later decided to pursue his acquisition of Twitter at the original price of $54.20 a share, reported CNBC.

Following Musk’s decision, a Delaware Chancery Court judge eventually ruled that Musk had until October 28 to cement the Twitter deal or head to trial.

Musk arrived at the Twitter headquarters earlier this week carrying a sink, and documented the event on Twitter, saying “Entering Twitter HQ – let that sink in!” and also updated his Twitter description to “Chief Twit.”

He tweeted a video of him and described his visit as an experience that he was trying to “sink in” as the Tesla CEO has until the end of the week to either close the Twitter deal or face a trial.

In July, in a surprising turn of events, Elon Musk who had long been showing his interest to buy Twitter terminated the deal. The Tesla CEO did so by alleging that Twitter violated their mutual purchase agreement by misrepresenting the number of spam and fake bot accounts on its platform.

After Musk put out the deal termination announcement, the market saw a sharp decline. Later, Twitter sued Musk accusing him of using bots as a pretext to exit a deal.

Again, last week, Musk confirmed that he will move forward with the Twitter buyout at the originally agreed price of USD 54.20 per share.

However, the Twitter deal legal proceedings had been put on hold by a judge overseeing the dispute until October 28.