England come back into thrilling T20 series vs Pakistan as Phil Salt clobbers home bowlers; it’s 3 all now with 1 to go 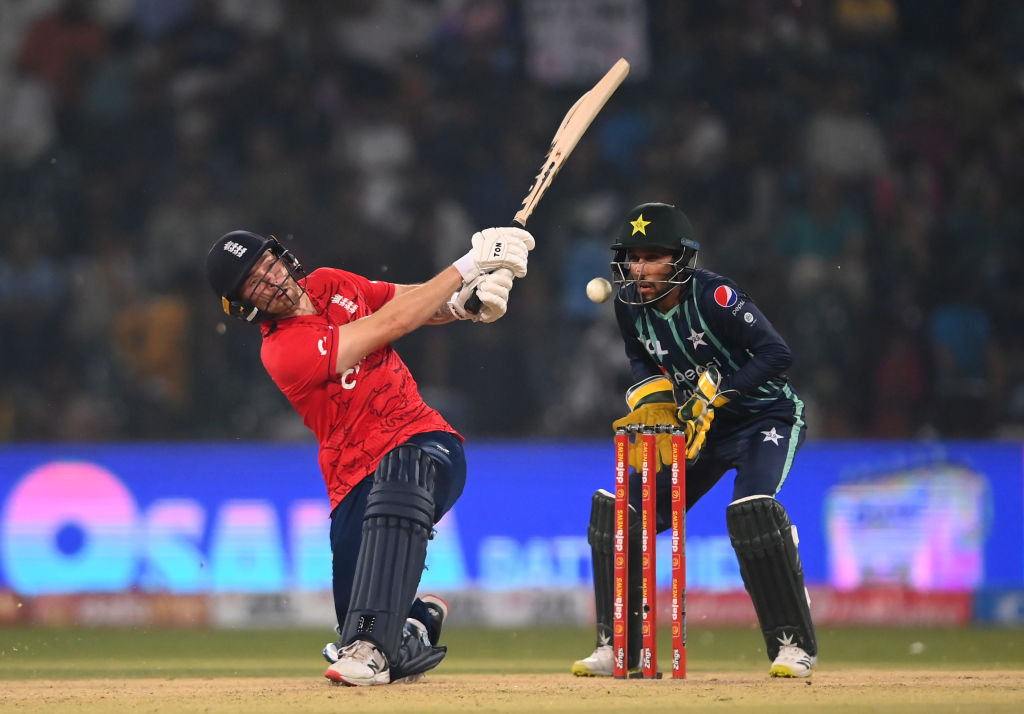 Phil Salt of England bats during the 6th IT20 between Pakistan and England at Gaddafi Stadium on September 30, 2022 in Lahore, Pakistan. (Photo by Alex Davidson/Getty Images)

Phil Salt smashed a robust career-best 41-ball 88 not out to help England thrash Pakistan by eight wickets in the sixth Twenty20 international in Lahore on Friday.

The England opener clobbered three sixes and 13 fours in the third fastest half century by an England batter in the shorter format to help his team chase down a target of 170 in just 14.3 overs.

England’s victory tied the seven-match series 3-3 with an intriguing final match in Lahore on Sunday.

England, who failed to chase 146 on Wednesday, were given a rousing start by Salt and Alex Hales who compiled 50 in just three overs.

Hales, who smashed four fours and a six in his 12-ball 27, holed out after a breezy 55-run start off just 24 balls before Dawid Malan helped add 73 for the second wicket with an 18-ball 26.

Ben Duckett remained not out on 26.

Salt completed his second T20I fifty off just 19 balls, improving on his previous best of 57 against the West Indies at Bridgetown earlier this year.

It was a complete onslaught by England batters who dominated Pakistan bowling with only spinner Shadab Khan taking 2-34.

England skipper Moeen Ali was delighted with a convincing win.

“Yes, very happy. Thought the way we batted in particular was outstanding,” said Ali. “It shows if you stick to the process, you don’t have to slog you can play proper shots. If you don’t lose wickets early on you can keep going and that happened.”

“I thought it was a good total, maybe 10-15 short but the way Salt played, it was outstanding and he gave England a good momentum in the first three overs.”

The Pakistan skipper, who hit his 27th half century, reached 3,000 T20I runs in 81 innings as he anchored the home team’s total after they were sent in to bat.

Azam hit three sixes and seven fours and added 48 for the fourth wicket with Iftikhar Ahmed (31) and 47 for the third with Haider Ali (18).

England are on their first tour of Pakistan for 17 years.