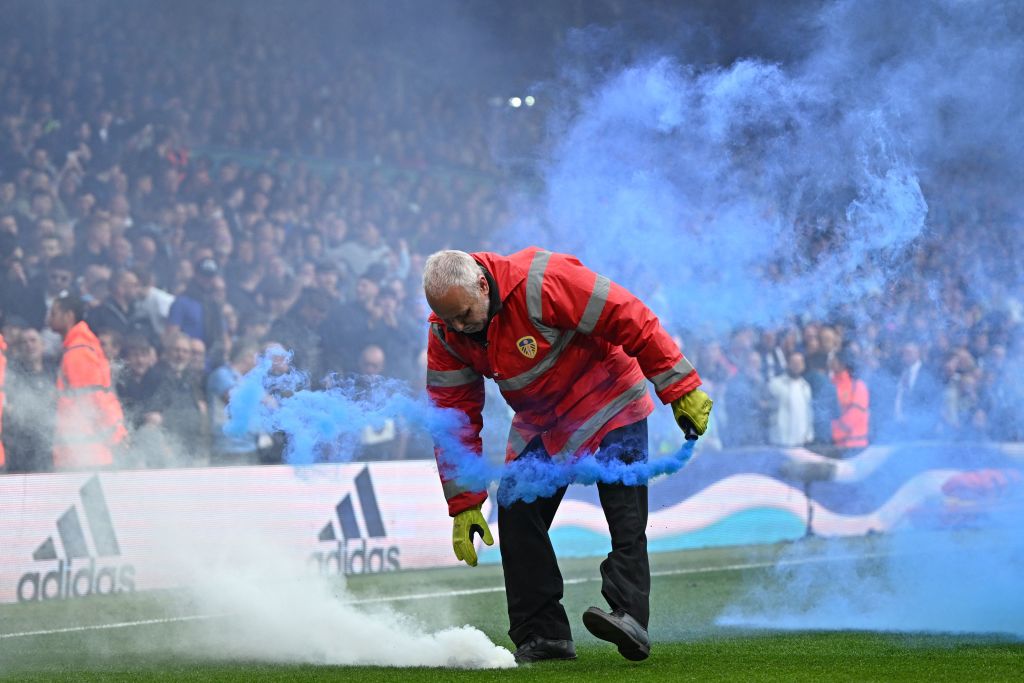 England’s Premier League and Football League have announced tough new sanctions for pitch invasions and the use of smoke bombs and pyrotechnics.

Last season saw an increasing number of pitch invasions at the end of the season with fans celebrating titles, promotion or survival.

Several altercations took place on the field, including one involving Crystal Palace manager Patrick Vieira, while Sheffield United’s Billy Sharp was attacked by a fan after a playoff defeat at Nottingham Forest.

Smoke bombs and pyrotechnics, which have long been used at games in continental Europe and elswhere in the world, used to be relatively rare in England but their use has become a more regular occurance.

The leagues and the Football Association said that from the start of the new season “all identified offenders will be reported by clubs to the police and prosecution could result in a permanent criminal record, which may affect their employment and education, and could result in a prison sentence.”

“Furthermore, anyone who enters the pitch and those identified carrying or using pyrotechnics or smoke bombs will now receive an automatic club ban. These bans could also be extended to accompanying parents or guardians of children who take part in these activities,” the statement said.

The bodies said they were working with the police and the Crown Prosecution Service to ensure prosecution “will become the default response”.

The leagues are also seeking to censor publication of videos showing pitch invasions and smoke bombs by working with social media companies to remove footage quickly while asking government to reform regulations to restrict the supply of pyrotechnics and smoke bombs.

FA Chief Executive Mark Bullingham said: “The rise in anti-social behaviour that we saw in stadiums at the end of last season was entirely unacceptable and put people’s safety at risk. Together, English football has introduced new measures and stronger sanctions, for the start of the coming season, to send out a clear message that we will not tolerate this type of illegal and dangerous behaviour.”

The move was backed by the Football Supporters Association (FSA).

“We are contacted by supporters on a fairly regular basis who have been caught jumping on the pitch, or with pyro in the stands, and without exception they regret doing it,” FSA head Kevin Miles said.

“Whether they had positive intentions or not is irrelevant in the eyes of the law – pyro and pitch incursions are illegal, you will be prosecuted and you will be banned by your club.”