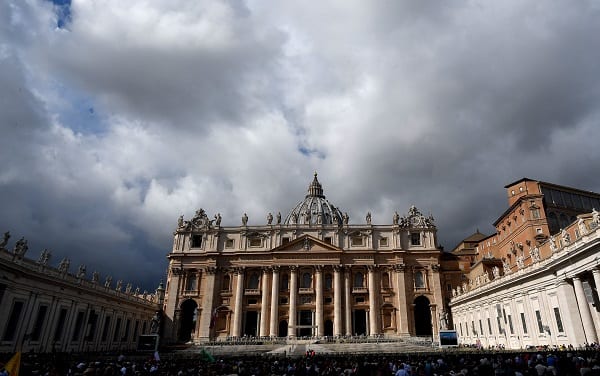 In her letter to Leonardo Cardinal Sandri, Prefect, Congregation for the Oriental Churches, Sister Lucy Kalappura also sought an opportunity to her to appear in person before a tribunal which would consider her appeal against the Congregations decision (Photo: TIZIANA FABI/AFP/Getty Images).

A KERALA nun, who has challenged the Franciscan Clarist Congregations decision to expel her, has written to the Vatican, alleging the disciplinary action was taken for participating in protests by a group of nuns seeking arrest of a bishop accused of raping a fellow nun.

In her letter to Leonardo Cardinal Sandri, Prefect, Congregation for the Oriental Churches, Sister Lucy Kalappura also sought an opportunity to her to appear in person before a tribunal which would consider her appeal against the Congregations decision.

She has also sought an opportunity to present her case to the Pope Francis.

The Congregation for the Oriental Churches in Vatican had dismissed Sister Lucys first appeal challenging the Franciscan Clarist Congregations decision to expel her for “failing to give a satisfactory explanation for her lifestyle in violation of FCC laws”.

However, it allowed her to present a new recourse to the Supreme Tribunal of the Segnatura Apostolica in Vatican.

“I am deeply obliged for providing me the opportunity for a further appeal to the Supreme Tribunal of the Signatura Apostolica. It is desired, in this connection, that an opportunity be granted to me to appear in person before the Tribunal to enable me to present to its honourable members my side of the situation.

“It is requested, further, that I be granted an opportunity to present my case to the Pope Francis, whom I venerate and in whose sense of justice I have absolute faith”, the nun said in her letter to Leonardo Cardinal Sandri.

Sister Lucy Kalappura, who took part in a protest by nuns belonging to Missionaries of Jesus Congregation, seeking the arrest of Bishop Franco Mulakkal, accused of raping a nun, was expelled by the FCC in August this year.  In her letter, the nun said the FCC congregation initiateddisciplinary action against her.

“In my case too, what purports to be disciplinary action, and what in reality are reprisals, against me commenced only after I stood by the sisters of the Missionaries of Jesus in their efforts to secure justice for the outraged nun. This is amply evident from the show cause notice issued to me, a copy of which is attached for ready reference,” she said.

“I wish to urge strenuously that the actions initiated against me, and the vindictiveness it reeks of, cannot be understood aright, if they are seen in isolation from the Franco Mulakkal matter as the trigger.

“I fervently hope that the honourable members of the Tribunal would appreciate the truth that I am a collateral victim of this Franco Mulakkal scandal, in regard to which the mettle of the Churchs commitment to truth and justice is being tested in full public view,” she wrote.

“It does not have to be argued that the Holy See being made to be seen as partisan in this case, or as hostile to justice being available to a rape victim, is sure to discredit the witness and integrity of the Catholic Church for the years to come.

“It is shortsighted to coerce nuns to perjure in legal proceedings in the hope that the ends of justice can be stalled thereby. It is bound to result in extreme and undying infamy to the Church,” Sister Kalappura said in the letter.

She submitted that the Franco Mulakkal case has already attained unprecedented public attention and people of diverse persuasions are seized of how it is going to pan out.

“What aggravates its repugnance is that it has burst into public attention amidst a series of corruption charges and criminal acts ascribed to church leaders of diverse denominations in Kerala.

“The only thing that will salvage the credibility of the Catholic Church in this context is to be seen as committed to truth and justice, without fear or favour. Attempts to the contrary are sure to be self-condemnatory; a concern that I cannot disown”, the nun said.

In its notice to the nun early in January, the congregation termed as “grave violations”, Sister Lucy possessing a driving licence, buying a car, taking a loan for it and publishing a book and spending money without the permission and knowledge of her superiors.

The nun dismissed charges levelled against her by the congregation, saying many of them were a “deliberate attempt to paint her in bad light.”

In its notices, the FCC alleged the nun violated its dress code in public without any permission and caused grave external scandal and harm to the Church by participating in the protest by Save Our Sisters Action Council on September 20, 2018 at Kochi, seeking the arrest of Bishop Franco Mulakkal, accused of raping a nun in Kerala.

The FCC, under the Roman Catholic Church, said the nun was issued “proper canonical warnings”, but did not show the needed remorse.