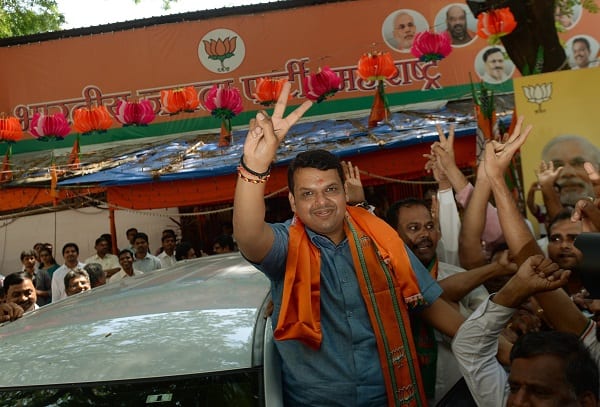 It was a day of records for the 49-year-old Nagpur-born BJP leader with close family links to the RSS. He is now the first non-Congress chief minister to win a second term in office in the state, seen as a Congress bastion until just five years ago, and only the second chief minister to complete his term in office (Photo: PUNIT PARANJPE/AFP/Getty Images).

DEVENDRA Fadnavis was on Thursday set to return as chief minister of Maharashtra, steering the BJP to another electoral win and dealing the NCP-Congress a blow but the victory gong sounded just a little hollow.

Fadnavis, however, has to share the spoils of poll victory with the Shiv Sena.

As the leads came in, it was victory indeed for India’s ruling party but not as decisive as it was hoping for.

The BJP, which contested 164 seats, hovered at the 100 mark while the Shiv Sena was ahead in 57, the leads taking the alliance past the magic number needed to come to power in the 288-strong assembly but leaving India’s ruling party to deal with its often tetchy partner declaring it would stick to its pre-decided 50-50 power sharing formula.

Fadnavis is a law graduate from Nagpur University and holds a postgraduate degree in business management. He was born and raised in Nagpur, home of the headquarters of the RSS.

Fadnavis started his political career in the 1990s.

He was an elected member in the Nagpur Municipal Corporation for two consecutive terms – in 1992 and 1997. He was also the youngest mayor of Nagpur, and the second youngest mayor in India.

He has represented the Nagpur-South West seat in the state Assembly since 1999.

It was perhaps his close equation with the RSS that helped Fadnavis navigate the troubled waters of Maharashtra politics.

Fadnavis has had a smooth run, having been given a free hand by Prime Minister Narendra Modi and BJP president Amit Shah to lead the saffron fold in the state.

With the BJP’s victory in the Lok Sabha polls and now in the state elections, Fadnavis has proved his credentials as an astute political leader who has left his political rivals behind in his rise to the top, said party insiders.

He inducted senior Congress leaders Radhakrishna Vikhe Patil and Harshvardhan Patil and a host of top NCP leaders into the BJP, pushing the opposition camp, already down and out after successive defeats in the Lok Sabha polls, into the defensive ahead of the elections. The NCP was poised to win 54 seats and the Congress 45.

Political observers describe Fadnavis as a patient listener and a “man of action” with extensive knowledge in various spheres. He is also known as a politician who is both erudite and popular with the people.

The Maratha quota agitation threatened the survival of his government, but Fadnavis reached out to the protesters and announced setting up of the State Backward Class Commission to get the demand for reservation in jobs and education ratified and enacted a legislation.

Similarly, instead of giving the loan waiver amount to banks, he assured that the the money was transferred directly into the accounts of farmers.

With the Shiv Sena mouthpiece ‘Saamana’ attacking the government frequently through its editorials, relations between the partners reached a breaking point in the run up to the Mumbai civic polls, which prompted NCP chief Sharad Pawar to predict collapse of the government.

“Political reality determines what decisions need to be made. Patience is the key,” Fadnavis told PTI in an interaction last week.

“When you face challenges, they teach you a lot. I learnt political maturity. Whatever agenda you set yourself… every morning throws up a new challenge and problems. While tackling every new challenge, I learnt that I must not give up my focus on what I propose to do,” he said.

Fadnavis has already set his goal in second term of making the state drought free, for which he plans to divert excess rain water from Konkan region to the Godavari valley.

He has also proposed to set up a water grid for the perennially parched Marathwada region.
He said his goal is to make the state a ‘one trillion dollar economy’.

In the last five years, Fadnavis has maintained his clean image even as he deftly handled the corruption allegations against some of his ministerial colleagues.

His wife Amruta is a banker and a playback singer while daughter Divija is in school. Mother Sarita is a homemaker.