Fishermen Turn To Maps As India’s Coasts Cleared For Industry 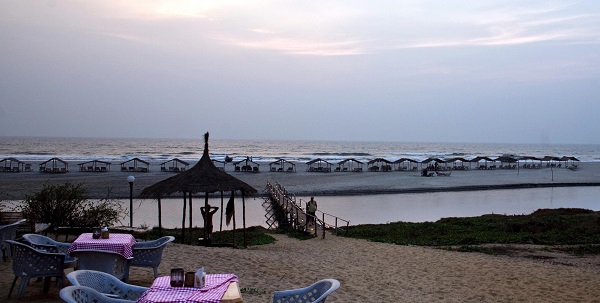 The Congress party, in a manifesto released ahead of a general election starting on April 11, has vowed to reverse the dilutions of the CRZ, and preserve the coasts without affecting the livelihoods of fishing communities (Photo: PEDRO UGARTE/AFP/Getty Images).

After generations of trawling the same waters, the fishermen on the coast of Tamil Nadu in southeastern India know where to cast a net or park a boat without resorting to signs or GPS maps.

But their customary rights over this common space – a right won by families who have fished it for centuries – are under threat as the demands of modern life threaten age-old livelihoods and their once fertile habitat.

First, families’ land and precious sea access was usurped by factories and ports. Now, their rights are under fresh attack by a newly amended Coastal Regulation Zone (CRZ) law.

“Governments have treated the coastline as an empty space that economic actors can take over, forgetting that it is common property of coastal villages, towns and cities,” said Kanchi Kohli, a researcher at think tank Centre for Policy Research.

“The changes to the law negate the socio-ecological uniqueness of this space and opens it up to mindless real estate development, mass-scale tourism and industry,” she said.

RL Srinivasan, who lives in Kaatukuppam – one of half a dozen villages by Ennore Creek near the city of Chennai – is typical of the fishermen under threat.

The Ennore Creek is drained by two seasonal rivers that empty into the Bay of Bengal through a network of canals, wetlands, salt marshes and mangroves, where villagers once harvested salt, caught crabs and filled their nets with fish.

Home to about 300,000 people, the area was protected by state and federal coastal zone laws, which banned construction, reclamation or alteration of the course of the water bodies.

But as Chennai expanded and industries fled the city, the state greenlighted ports, coal-powered thermal plants, and petroleum and chemicals factories, which destroyed the salt pans, polluted the water and killed the fish and the crabs.

“The Creek has been our life, our livelihood for generations,” said Srinivasan.

“Yet for the government, it is just land that can be used as an industrial zone and a dumping ground. The lives and livelihoods of the fishers do not matter,” he said.

It is a scene playing out in thousands of coastal settlements dotting India’s 7,500-kilometre (4,660 miles) shoreline, from remote rural hamlets to bustling urban colonies.

With reduced no-development zones, and laxer rules for real estate and commercial projects, the new CRZ opens up common-use spaces such as beaches, salt marshes, and boat parking areas for tourism and industry, according to analysts.

More than four million people in India are estimated to make a living from fishing and related activities. They are often among the nation’s earliest inhabitants, yet have few formal rights over the land or the water on which they depend.

Amid urbanisation and industrialisation, India’s coasts have become dumping grounds for sewage, garbage and factory waste, even as they fight the rising threat of erosion and flooding.

The Congress party-led government sought to protect the fishing community and preserve their ecology by enacting the CRZ law in 2011.

But several states diluted it, so as to promote tourism and industry and generate jobs. In 2014, a new government led by prime minister Narendra Modi ordered a review of the CRZ.

Despite protests from coast dwellers and environmentalists, a cut in the no-development zones was announced in January, allowing eco-tourism and waste treatment in sensitive areas.

The government says the law was amended to “conserve and protect the unique environment of coastal stretches and marine areas, besides livelihood security to the fisher communities and other local communities in coastal areas”.

But life is about to get much harder for Srinivasan and his fellow anglers, said Pooja Kumar at the advocacy Coastal Resource Centre in Chennai.

“Coastal communities are hanging by a thread,” she said.

“The communities have fished and lived in these areas for generations, but with no record of their common spaces, their fishing grounds, they are extremely vulnerable.”

Their one hope may be the modern mapping methods they once shunned.

The Coastal Resource Centre began mapping coastal villages in Tamil Nadu about five years ago, using handheld GPS devices to mark common spaces – including where fishermen parked their boats and dried the catch – then plotting the spots on a map.

These maps are then sent to district and state officials for their approval, so they can be integrated into official maps under the coastal zone management plan.

Kumar and her colleagues have mapped about 75 of Tamil Nadu’s 650 coastal villages so far.

Not all their maps have been integrated with official survey maps, but they have been used to resolve disputes between fishing communities, and helped stop the construction of a road that would have passed through a coastal settlement, she said.

“The mapping gives the community a sense of confidence and security. They are seen as people with rights, rather than as encroachers,” she said.

“There is an urgent need to map the coastal commons. It is the most effective tool for assertion of the community rights.”

But with no legal protection for the coastal commons, mapping them and having the states recognise them will still not protect them under the new CRZ notification, said Kohli.

The Congress party, in a manifesto released ahead of a general election starting on April 11, has vowed to reverse the dilutions of the CRZ, and preserve the coasts without affecting the livelihoods of fishing communities.

That may be Kaatukuppam’s only hope, after the state in 2017 released a map that did not show most of Ennore Creek. In its place stood land earmarked for a petrochemical park.

“We have seen the crabs disappear, the fish disappear. We had never seen a river disappear,” Srinivasan said.

“But it is not just us who are suffering; people should realise this sort of development hurts everyone.”