Haryana Congress Must Forget Past To Take On BJP: Kumari Selja 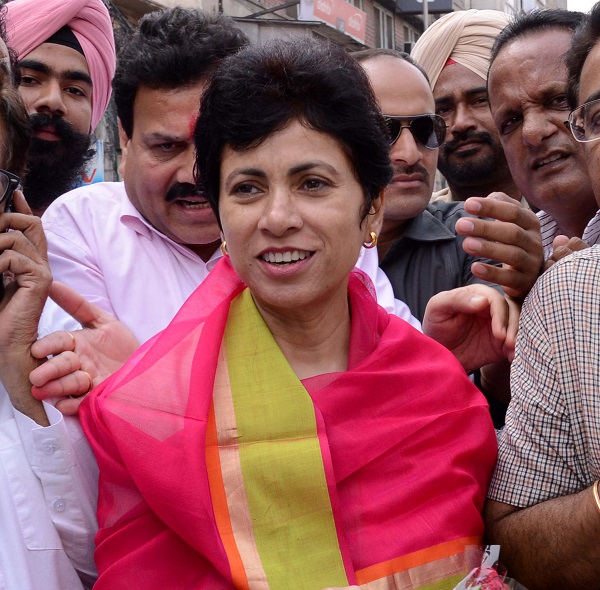 Selja, who was appointed Haryana Pradesh Congress Committee chief on Wednesday (4) replacing Ashok Tanwar, also said the BJP is using the abrogation of Article 370 provisions as a poll plank in Haryana to divert attention from the “failures” of the Manohar Lal Khattar government (Photo: NARINDER NANU/AFP/Getty Images).

CONGRESS’ newly-appointed Haryana unit chief Kumari Selja on Thursday (5) said former chief minister Bhupinder Hooda’s recent remarks reflecting factionalism belonged to the past and the party must forget and move forward unitedly to take on the BJP in the assembly polls.

Selja, who was appointed Haryana Pradesh Congress Committee chief on Wednesday (4) replacing Ashok Tanwar, also said the BJP is using the abrogation of Article 370 provisions as a poll plank in Haryana to divert attention from the “failures” of the Manohar Lal Khattar government.

“He does not have anything to offer to the people of Haryana that is why he is taking shelter under this,” Selja told in response to Khattar’s remarks that there is overwhelming support for the Centre’s move to revoke Jammu and Kashmir’s special status in Haryana and that BJP’s popularity has soared.

The BJP, she said, wants to make nationalism and abrogation of Article 370 major poll issues but this is not right.

Asserting that the assembly elections will be fought on “real issues” that affect people, Selja also said the “Modi factor” will not work in the polls slated to take place later this year.

Selja said all the party’s top state leaders will work together in the polls to give a strong fight to the BJP.

She said Hooda’s remarks at the ‘Maha Parivartan Rally’ on August 18 in Rohtak when he declared the Congress had “lost direction” was in the past.

Hooda’s statement that he would have four deputy chief ministers was also in the past, she said, emphasising that the focus right now was on winning elections.

In a bid to end factionalism in the party ahead of assembly polls, the Congress named Selja chief of its state unit and appointed former chief minister Hooda head of the election management committee.

Congress president Sonia Gandhi also appointed Hooda the Congress Legislative Party (CLP) leader, and by virtue of that leader of opposition in the state assembly.

Asked how she would tackle infighting in the party’s state unit, Selja said everybody fights for his or her space and that is a natural phenomenon.

“Basically, we need to give respect to everybody and everybody has to also realise that we are all in this together and we have to take support from each other and work together. I think all of us will rise to the occasion, we will all work together,” the Haryana Congress chief told.

The 56-year-old Rajya Sabha MP sidestepped a question on whether Hooda could be the chief ministerial face of the party, saying the focus right now is to see that everyone works together.

Describing the BJP as a “propaganda machine”, Selja alleged that the ruling party has always diverted people from “real issues”.

“The BJP takes the people to other issues when there is nothing to show. Right now in Haryana, law and order has collapsed. All sections are unhappy, be it farmers, labourers, women, youth,” she said.

Hitting out at the Khattar government, Selja said the entire state economy is in a slump.
“Youngsters don’t have jobs. We have Maruti, where production is going down. There is danger lurking everywhere. There will be nothing to show, so they give one slogan or the other. We have to bring the people on real issues,” she asserted, citing price rise, women’s safety, crime and employment to youth.

Issues of the people will resonate with the electorate in Haryana, Selja said.

“They (the BJP) know they are a failure on these issues. They want to divert from the real issues that is why they are raising such issues (as Article 370),” she said.

This is the Haryana Vidhan Sabha election and they should raise Haryana issues, she asserted.

On caste politics in Haryana and the Jat versus non-Jat divide, Selja said the Congress has been a party of 36 castes.

“Even at the time of Jat reservation they (the BJP) allowed the fire to blaze and increased divide. They have a policy of polarisation. Congress has never played this kind of politics. Congress believes in taking everyone along,” she said.

Selja also slammed Khattar for making a derogatory comment on “brides of Kashmir”, saying the BJP has conveniently forgotten that the Haryana chief minister has been quoted in Pakistan’s letter to the UN over alleged human rights violations.

“He (Khattar) has commodified women. He is talking about Jharkhand women, he is talking about Kashmiri women. These people think they can make light remarks about women. It is reflective of their mindset, what they actually think of women,” she said.

Khattar last month courted controversy by saying that people from Haryana “could now get brides from Kashmir”, apparently in reference to the scrapping of Jammu and Kashmir’s special status under Article 370 of the Constitution.